One of the first things new keepers usually ask themselves when buying a red-eared slider turtle is, “Should I get a male or a female?”

This question may be more important than you first think.

Knowing the sex of your red-eared slider will influence the husbandry you provide. Their gender will determine enclosure set up, suitable tank mates and even diet.

Are you are questioning the gender of your turtle? Do you want to know which sex will make the best pet? Did you know there is only one way to sex hatchling sliders? This article will answer those questions and go in depth on how to sex a red-eared slider turtle.

How To Sex A Red-Eared Slider 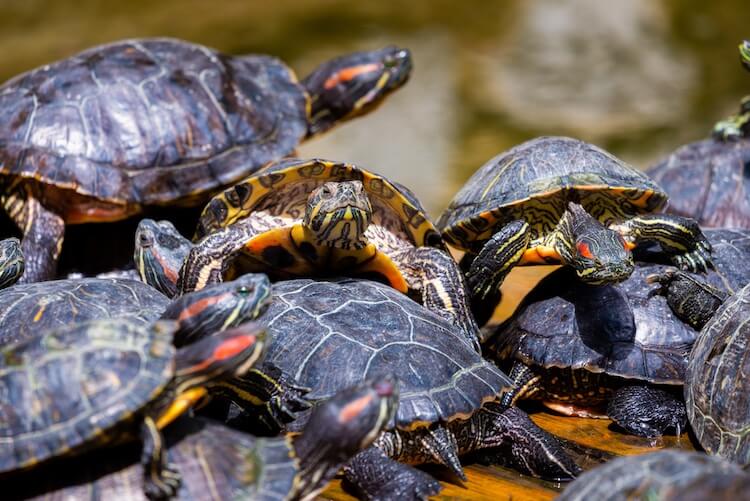 New keepers will quickly notice there are some obvious differences between male vs female red-eared sliders. These differences will usually not be observable until your turtle reaches sexual maturity, but once they do, they are fairly obvious.

There a few things to look out for which will let you know if your red-eared slider is male or female:

One physical characteristic that varies between males and females is claw length.

Male red-eared sliders have longer claws on their front limbs. These long claws are waved in front of a female’s face in a mating display and were built to impress.

The average length of an adult male slider’s front claws is over 1.5cm. Females have noticeably smaller claws at 0.8cm on all legs.

One study found that while males had longer front claws, females tended to have larger back claws. These large back claws are thought to help them build nests for their offspring.

Looking at claw length can help you determine if your red-eared slider is a male or female, though you won’t be able to notice a difference until your turtle is at least 2 years of age. This is when males reach sexual maturity and their claws begin to rapidly grow.

One thing to be cautious about with this method is that some males housed in tanks that are too small can have underdeveloped claws that aren’t nearly as large as they should be. This is also true for turtles who aren’t fed a proper diet.

Shell size and overall weight can be a good indicator of the gender of a red-eared slider.

Sliders are a species where the female is generally larger than the male.

When females reach sexual maturity at 5-6 years of age they can reach lengths anywhere from 7-13 inches long. Males on the other hand usually max out at 7 inches long. Females will also generally be heavier, with weights of up to 7 pounds. Males tend to weigh in at 4 pounds or less.

While size can be a good indicator of sex there are some drawbacks. Some males can be above average and females can be below average, meaning there may be some overlap. If you pick a juvenile female and an adult male, you may have some trouble using size to differentiate.

It is best to compare two individuals of the same age to determine their gender. If one is much larger it is likely a female.

The shape of your turtle’s shell can tell you a lot of things including their gender.

For a red-eared slider you will want to look at the bottom side of their shell. The plate on their belly is called the plastron. Females have a relatively flat plastron that can be slightly rounded outward (i.e. convex). A male’s plastron will have a noticeable divot or depression toward the back and will be slightly concave.

Males will have a noticeable divot in their plastron which allows them to be more stable when mounted on a female. This characteristic in males is actually a feature shared by most species including water turtles!

To check your red-eared slider’s sex you will want to pick them up gently:

This method works only for males that have reached sexual maturity. You may be able to feel a dent in males as young as 1 year old, but it’s safer to wait until they are at least 2. This will help ensure that all their secondary sex characteristics have developed.

RELATED: Can Turtles Live Without Shells?

Red-eared slider males have tails that are much longer and thicker than the tails of females. Males have this larger tail because their sex organs are stored near their tail base. Their tail will often stick out and be more noticeable.

Males have a cloaca that is much further down on their tail. This allows their sex organs to reach the female when it comes time to mate. The cloaca is an opening found in all reptiles that is used for both waste excretion and reproduction.

If their tail is long and thicker, you might have a male.

Females will have a cloaca much closer to the tail base. Females don’t need as much space in their tails as their reproductive organs are housed closer to their body. This is why if their tail looks short and thin, they are likely a female.

Their color is bright, vivid and they have clear beautiful patterning on their shell and skin.

Red-eared sliders tend to darken as they age due to higher levels of melanin pigment. This darker coloration tends to be more extreme in males. Both sexes can change in color, but it is most notable in males.

A turtle will have done most of its color changing by the time it reaches sexual maturity.

Color should not be the only trait you use to tell if a red-eared slider is male or female. Some studies have shown that the color of the substrate can actually influence the pigmentation of your turtle.

Males tend to act differently than females in most species of reptiles. This is true for bearded dragons and also slider turtles. These behavioral differences can give you a clue to your turtle’s gender.

Male red-eared sliders are more territorial and will act more aggressive in the presence of other individuals. Males will often hiss, bite and hit others with their shells. This aggressive behavior will often be displayed with tankmates, especially when food is involved. Because of this it is recommended that males be housed alone.

Females are much more tolerant, easy-going and can easily be housed together.

You may also notice differences in reproductive behavior.

When females reach sexual maturity at 5-6 years of age they may seem restless and even stop eating. This is especially common in individuals that are pregnant or carrying infertile eggs. Females can also show nesting behavior and may need a lay box.

Males will display none of these pregnant or nesting behaviors. 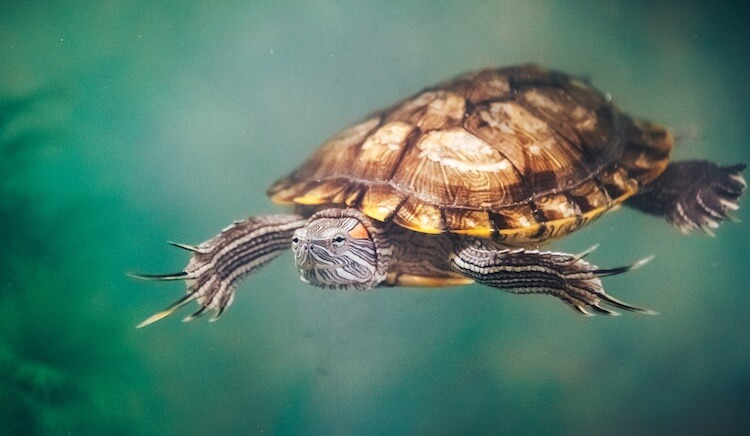 Adult males will generally be under seven inches long and weigh up to four pounds. They are darker in color than females, and some even appear entirely black with no visible yellow or red striping. The plastron of their shell is usually curved inward and their tail is thick and long.

Some other male vs female differences include the male’s claws. On their front limbs males’ claws are up to 3x longer than the claws on their back legs. They are nearly twice as long as the claws of female turtles.

Some keepers want a male because of their smaller size, while others prefer females due to their social behavior. Male red-eared sliders also do not display any reproductive behaviors and do not need specialized diets or husbandry during breeding. 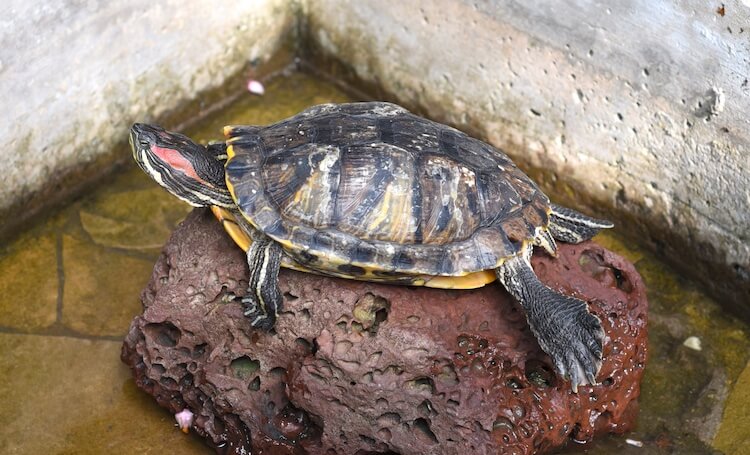 Adult females are much larger than males and reach lengths between 7 and 13 inches.

Females have more vibrant colors than males and will keep some of their bright red or yellow juvenile stripes. Unlike males their plastron is flat and can sometimes even be slightly curved outward. Their tail is short and thin with the cloaca near the tail base.

The general rule is if the cloaca is located above the halfway point the turtle is female.

Females have claws that are all the same length on every limb and the back claws are slightly longer than the back limb claws of males. In terms of behavior they are generally more social and can be housed together.

Some keepers want a female red-eared slider as they are more vibrant in color, social and can be housed together. If you are looking to have more than one, a female will be a better option. If you are considering breeding you may also want to buy a female first as they take much longer to reach sexual maturity. 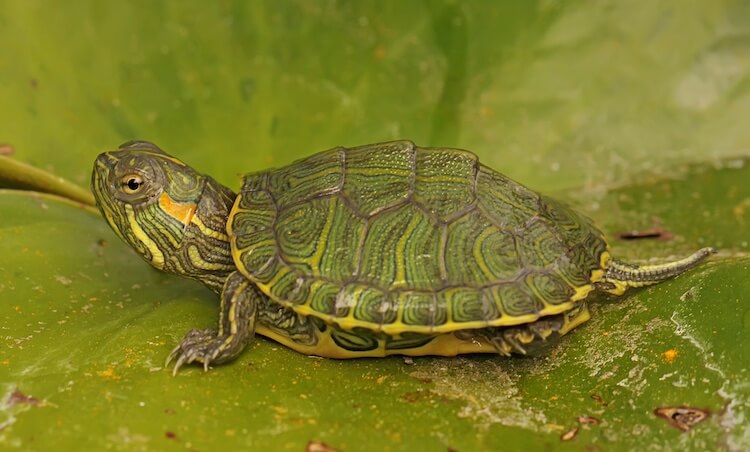 Did you know there is only one way to determine the sex of a hatchling red-eared slider?

Maybe you have adopted a hatchling and are wondering if they are male or female.

You have two options.

Wait until your slider turtle reaches sexual maturity in around 2-6 years, or ask the breeder.

Hatchling male and female sliders are usually around the size of a quarter and are identical in every way. The only way to determine the gender of a turtle that hasn’t reached sexual maturity, is to know what temperature it was incubated at.

If the breeder knows what temperatures the eggs were incubated at there is a good chance they can accurately predict the gender. If the breeder does not know, you might have to wait a few years to find out the sex of a red-eared slider turtle.

Males are considered fully grown between 2 and 3 years, while females are sexually mature between 5 and 6 years. It won’t be until they reach sexual maturity that you start seeing physical differences between them.

By three years of age you are usually able to identify males fairly easily. Some characteristics you may see include things like darker coloration, thick and long tails, aggressive behavior, large front claws and concave areas of the plastron. 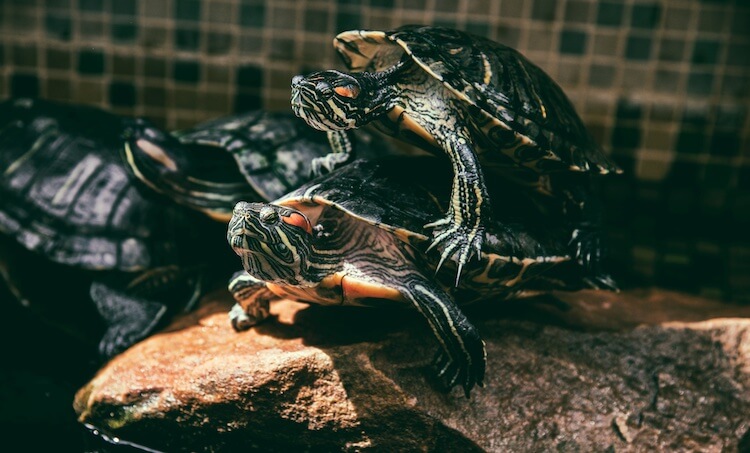 Differences between males and females will usually not be obvious until they reach sexual maturity. If the breeder does not know what temperature their turtle eggs were incubated at then it may be a while before you find out their gender.

Males tend to be smaller and need to be housed alone because of territorial aggression. They are darker in color, their shell is usually concave, their tail is thick and long and they have large front claws.

Females are physically bigger, more colorful and can be housed together. Their tail is short and thin with the cloaca near the tail base.

After 2 years you can use physical characteristics like body size, shell shape, color, shell size, tail shape and claw length to identify mature male turtles. To highlight the physical differences between males and females it is often easier to compare turtles of the same age.

Sexing a red-eared slider is an important first step in providing them with proper care. Their gender will affect the husbandry and tank size you provide.

Did these 6 tips help you sex a red-eared slider?

Nigel is a lifelong reptile lover and has kept pet lizards since childhood. His first was a pet Leo which was shortly followed by a Beardie named, Rocky. For the last 10 years he has kept over 20 different species but his favorite is his Banana Ball Python, Monty.

More Reptiles’ care sheets, articles, content and videos are intended to be used for a general nature only. It is not intended to constitute or replace professional veterinary advice.