If you are not sure how to sex a Bearded Dragon both genders end up looking like plain old’ lizards.

Body size, head size, and tail shape are just a few male vs female differences. Not only are there physical differences, but males actually behave very differently! These behaviors can also help you when sexing a Bearded Dragon.

Want to learn how to sex a Bearded Dragon? Are you not sure if you want to buy a male or female? Keep reading and you will learn all about the differences between male and females.

How To Tell If A Bearded Dragon Is Male Or Female 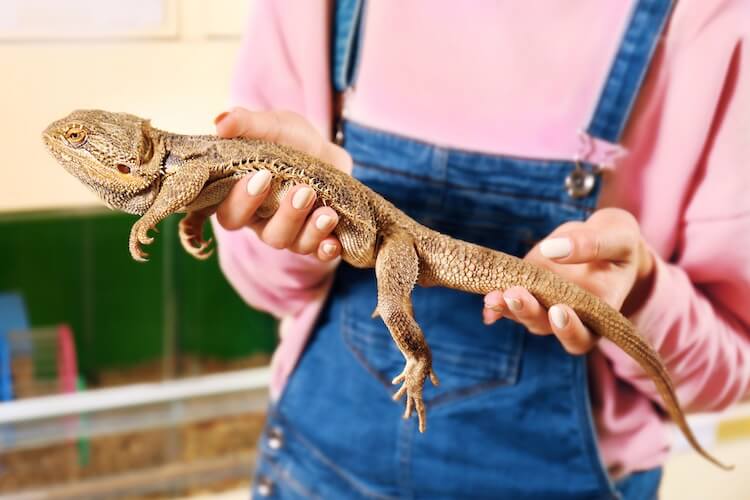 There are a few different ways to sex a Bearded Dragon. Males have larger bodies, bigger heads, a wider tail base and hemipenal bulges. They are also much more aggressive and will present their spikes more frequently than females.

The method you will use to determine if you have a boy or girl Bearded Dragon will depend on their age and ability to be handled.

Beardies are actually very sexually dimorphic and have some pretty noticeable differences, once you know what to look for! In this section we will discuss all the different ways you can sex your Bearded Dragon. When in doubt use a few different methods to be sure…

If you cannot see any hemipenal bulges it is likely that your bearded dragon is a girl.

In order to check your Bearded Dragon for hemipenal bulges it is important that they are comfortable being handled. If they are young or overly squirmy you can easily cause injury using this method. This is not the best method for sexing young or unhandled individuals.

If you have a male you should see two bulges on the lateral sides of the bottom of the tail base. These bulges should be paired grooves that run vertically down the center of the tail to the cloacal opening.

With a female there should have a single bulge at the tail base. This single bulge runs horizontally above the center of the cloaca and will be a lot less defined.

This method can be used for any Beardie that is older than 12 weeks, but it can be difficult to see the hemipenal bulges in babies. Their small hemipenes can be hard to see without the flashlight.

If you are having trouble sexing your bearded dragon you will have an easier time using a flashlight. This method is the same as the method above, but the flashlight makes the bulges easily visible. It is similar to how you can shine a flashlight on an egg to to see the inner contents.

Hold your bearded dragon in the same position as before:

If your bearded dragon is a boy you should see the hemipenal bulges at the bottom of the tail base as two dark red grooves with black shadows on either side.

Girl bearded dragons should have a singular black bulge in the middle of the tail base.

Some of the most obvious differences between male vs female bearded dragons are tail size, head size and their beards. This species displays sexual dimorphism which means that males and females have different physical appearances.

In general the tail base is usually wider and thicker in males than in females. This thick tail is because the hemipenes are stored in the base of the tail. Remember the method we used to sex a Bearded Dragon in the example above!

Females on the other hand have much slimmer and narrower tails that taper very distinctly at the base.

When looking at your Bearded Dragon from the top down this difference in tail size is very easy to see. This can be seen in younger, juvenile individuals too. 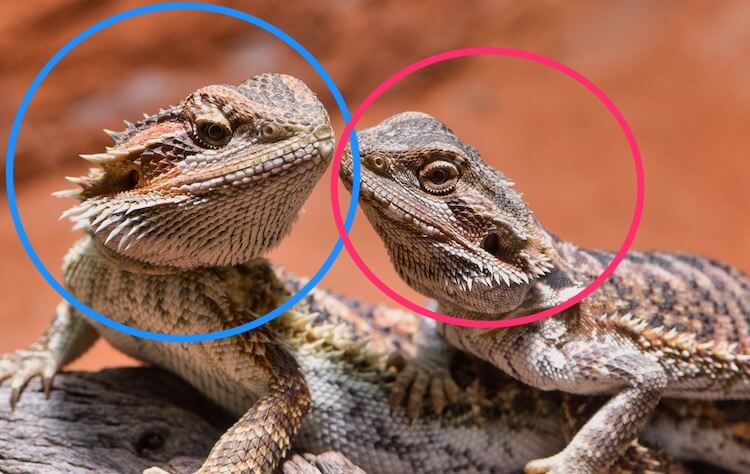 Head size is different between boy and girl bearded dragons. Males have much thicker, wider heads that they use to intimidate animals in the wild. Females have narrower heads that are also generally smaller.

This difference in head size is usually harder to see in juveniles and easier to see when males have fully grown.

A male bearded dragon head will also have a different presentation of spikes. Male Beardies will often present their beard spikes much more frequently than females. They also tend to have much darker beards that they will inflate and stiffen when threatened.

Males also puff their dark bears when they desire to mate, while females usually only display this behavior when threatened. 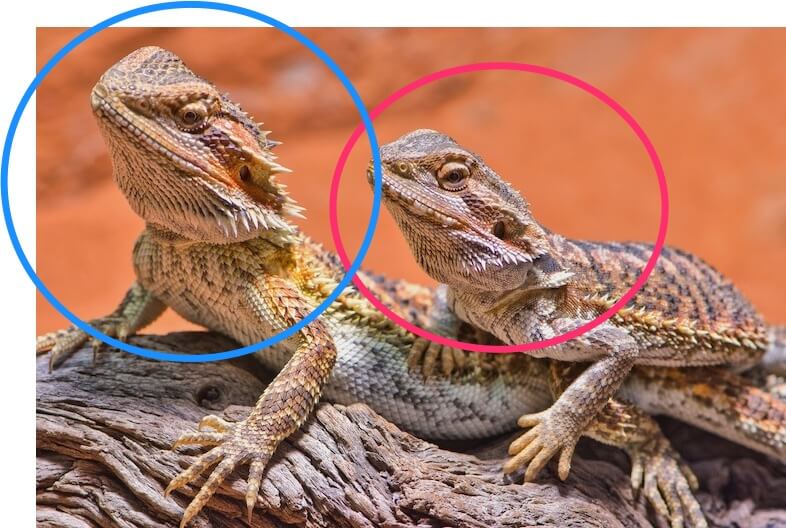 Males are normally slightly larger in body size so that they can compete with other males, hunt and mate with females. Females are often naturally lighter and shorter.

Males frequently reach up to 24 inches long while females only reach 19 inches.

A full grown bearded dragon will measure 16 to 24 inches long and weigh between 380 and 500 grams. You may notice that females fall on the shorter and lighter side, while males will be towards the heavier end. It is not uncommon for males and females from the same clutch to have a 100+ gram weight difference when fully grown.

Expect a female to be smaller in size, have a slimmer head and a narrower tail that tapers at the base.

Femoral pores are pores that are located inside your Bearded Dragon’s thighs. These pores are used mainly during breeding or other social interactions to secrete pheromones.

If your Bearded Dragon is male you should see large clearly defined circles on their inner thighs. These circles are usually the size of very small pebbles and run in a line from the beginning of the thigh to the knee joint.

Females still have these pores however they are smaller and usually harder to see. Female femoral pores are around the size of the head of a pin vs males which can have pores the size of very small pebbles.

Beginners may have some difficulty sexing Bearded Dragons from femoral pores alone.

Often it is hard to compare pores without having a Bearded Dragon of known sex to compare with. This technique should also not be used on individuals under 12 months old. Beardies under 12 months are not fully developed and the femoral pores will often look identical between males and females at this age.

The cloaca in reptiles is an opening used for waste and breeding. This opening is also called the vent and is different in sexually dimorphic lizards. Males have a cloaca that is usually wider than females. The reason for this is that this is where their hemipenes are everted during breeding.

Using this technique will be very similar to the method used for checking femoral pores.

If your Bearded Dragon is a boy you will see a fairly wide cloacal opening, when compared to a female. The exact size difference will depend on the individual as cloaca size differs with body size. However, females will always have a narrower cloaca.

This method is difficult if you do not have a Bearded Dragon of known sex to compare with.

Observing the cloacal opening width is best when combined with other techniques like checking for a hemipenal bulge to sex a Bearded Dragon.

Males need time to mature for the differences to become visible so this technique will not work with individuals under 12 weeks old.

Lots of the physical differences between girl and boy Bearded Dragons can be explained by their natural behaviors.

Male Bearded Dragons are highly aggressive and competitive with other males. They are known to frequently fight each other in the wild and compete for the attention of females. You will often see them hiss, stamp their feet and puff their beard.

Highly competitive, aggressive males need to be bigger and more intimidating. Because of this you see males with a bigger overall body size and larger heads.

Males also communicate and assert dominance through pheromones. Because of this they have much larger and more defined femoral pores.

They generally have the same shy personality throughout the year, apart from breeding seasons.

At What Age Can You Sex A Bearded Dragon? 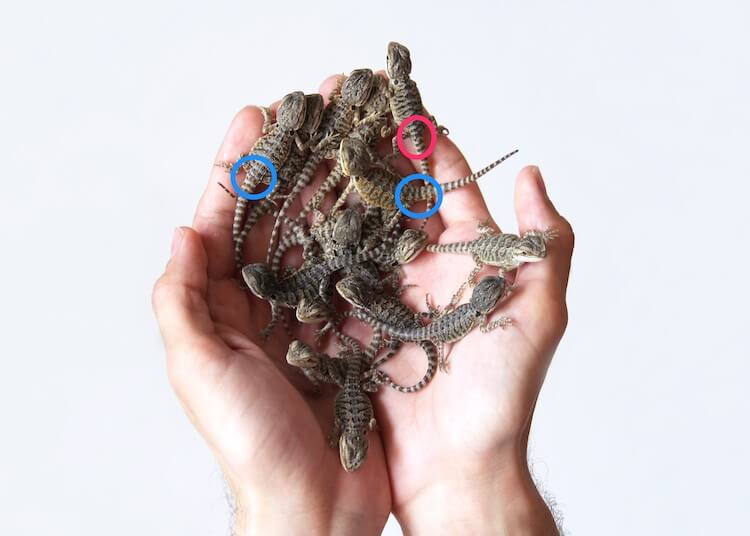 Baby Bearded Dragons can be difficult to sex. Most of the obvious traits like a larger body, head size, tail size, hemipenal bulges and femoral pores have yet to develop or mature. Younger Beardies are also less socialized to handling which can make safely sexing them difficult.

In general it is best to wait until your Bearded Dragon is at least 12 weeks old.

It is possible to accurately sex a Bearded Dragon from 12 weeks, especially for experienced keepers.

Beginners might be best waiting until 12 months of age to get the most accurate results. At this point it is easier to see certain characteristics like hemipenal bulges.

If you are in a rush the flashlight method is one of the easiest ways to sex your Bearded Dragon. The flashlight helps make the small hemipenal bulges more visible, especially in juveniles.

There are no hard and fast rules for babies and any attempt to determine their gender will be more of an educated guess. You will be able to tell a boy from a girl with more accuracy once your Beardie has matured into an adult after 12 months.

Shine a flashlight at the tail base from the top-side. A male will have two hemipenal bulges that look like two dark red grooves with black shadows on either side. Females have a less defined, single bulge that runs horizontally above the center of their cloaca, not vertically.

The presence of their hemipenes makes their tail base and cloacal opening much wider. They are also bigger in size, have larger heads and tails and bigger femoral pores.

Females are naturally lighter and shorter and have smaller heads and narrower tails. They also have smaller femoral pores that are around the size of the head of a pin. Their shy nature means they will only puff their spikes when threatened and are more likely to arm wave and head bob.

Did we help you sex your Bearded Dragon? Let us know by leaving a comment below. 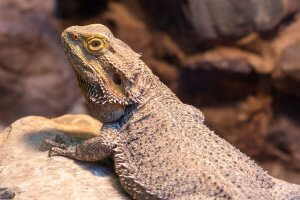 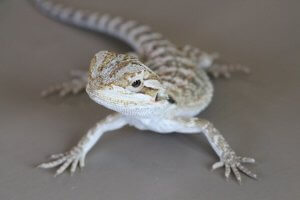 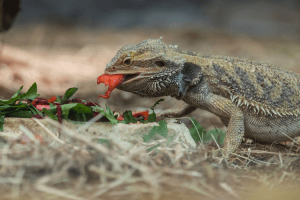