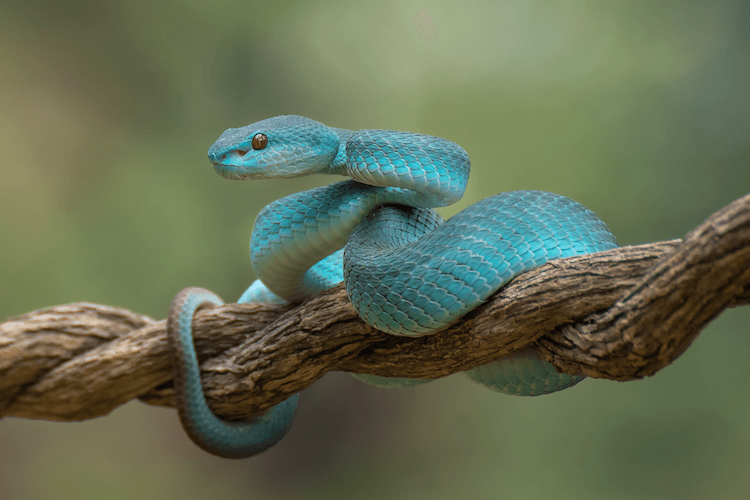 When you think of snakes, you probably don’t think of an entirely teal pit viper!

You may be surprised to learn that blue snakes are real.

These snakes are some of the rarest and most uniquely colored animals on the planet. It is more common for snakes to be brown, black, white, tan or red.

While we couldn’t fit everyone on this list, we have rounded up 15 of the most beautiful and interesting species to show you…

There are an estimated 50 species of blue snakes.

Some families like Colubridae or Viperidae have lots of azure, cobalt and navy species, while others don’t have any.

These snakes can be found all over the world, but one thing they all have in common is their beautiful shades of blue.

If a snake is blue there is usually a good reason why.

For animals, blue is extremely difficult and energy intensive to produce. This is because instead of being produced by a pigment, it has to be produced by specific skin structures.

Many reptiles don’t want to waste the energy needed to produce blue, which is why it is so rare to see.

Snakes are usually blue for one of three reasons: reproduction, camouflage or warning.

Some species use bright colors to attract a mate, while others may use a darker navy as camouflage in their environments. Other snakes that are highly venomous may use bright cobalt to indicate they are dangerous.

One thing that may be confusing is the difference between being blue in color and being “in blue”.

A snake “in blue” is one that is about to shed, regardless of body color.

This is because the eyes of a shedding snake will look clouded over and slightly grayish-blue in color. 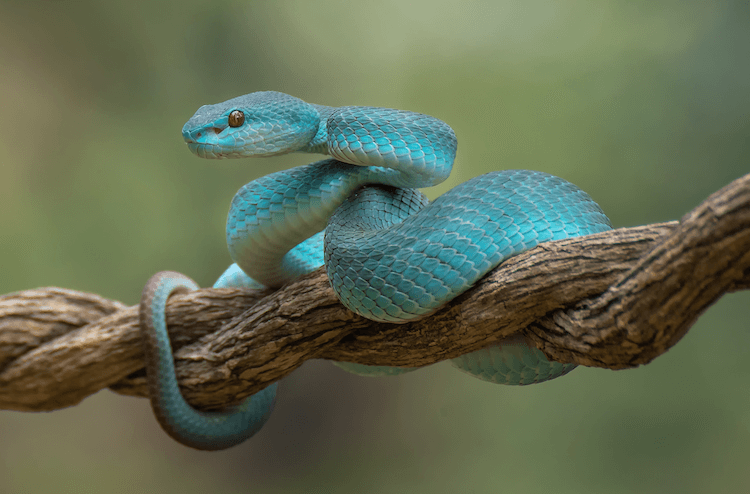 Depending on their range, they are known to have green, yellow and blue populations.

This snake has quite a bit of color variation.

The Sunda island pit viper is probably one of the most vivid blue venomous snakes on this list. This species is extremely venomous and found in Indonesia.

Common tree snakes are an Australian species that are usually green or brown in color.

There is a very rare, genetic mutation that produces the blue phase common tree snake.

This mutation turns these green snakes into a steely blue gray with a bright blue iridescent belly.

Finding the blue phase in the wild is extremely rare, but their beautiful coloration makes them stand out. 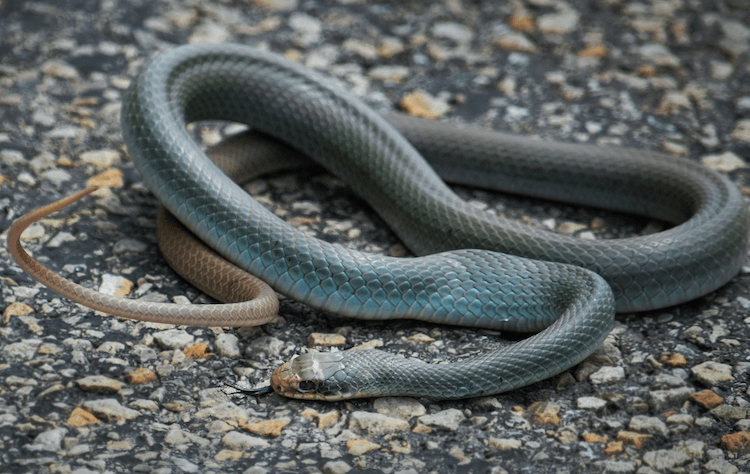 Blue racer snakes (Coluber constrictor foxii) are a bluish gray species with a cream-colored chin and dark gray banding across their eyes. They also have blushings of lighter blue on the side of their bodies, near their cream underbelly.

Their combination of blue hues is stunning and makes them one of the most beautiful of any North American species.

The blue racer is relatively common and easy to find in the wild and can be found in Eastern North America. 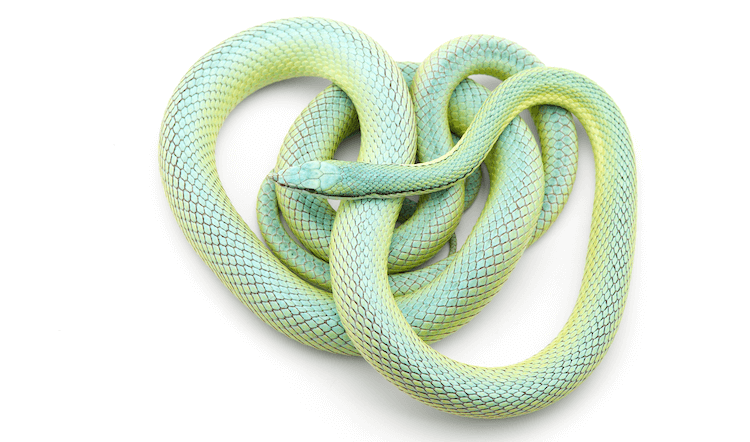 Despite the name, these snakes aren’t always green. They sometimes have a bluish tint to their scales which results in a beautiful body color.

This species is found in South America and is a member of the Colubridae family.

Other species from the Colubridae family include the Indigo Snake and Blue Racer. 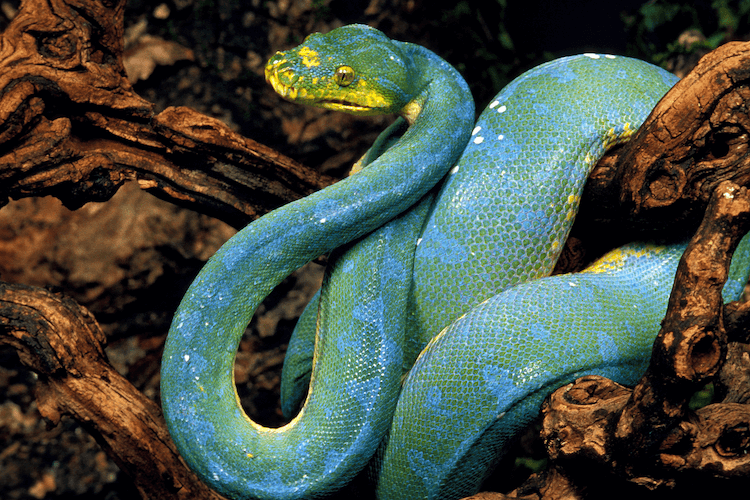 Green tree pythons are usually green, but in this case, there is a specific morph called the High Blue.

Native to the islands around Australia, Indonesia and New Guinea, many consider this teal snake the world’s most expensive with a price tag of $1.8 million. 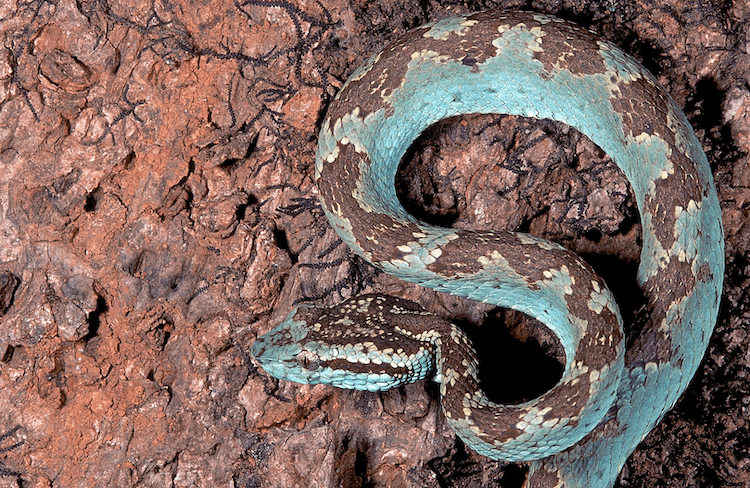 Malabar pit vipers (Craspedocephalus malabaricus) have a bright greenish blue underbelly and sides. Their greenish sides are contrasted by a brown and black speckled pattern on their dorsal side and head.

Also known as the Malabar rock pit viper, they are native to India and highly venomous.

This snake has many possible colors, including brown, yellow, green and, most interestingly, blue. 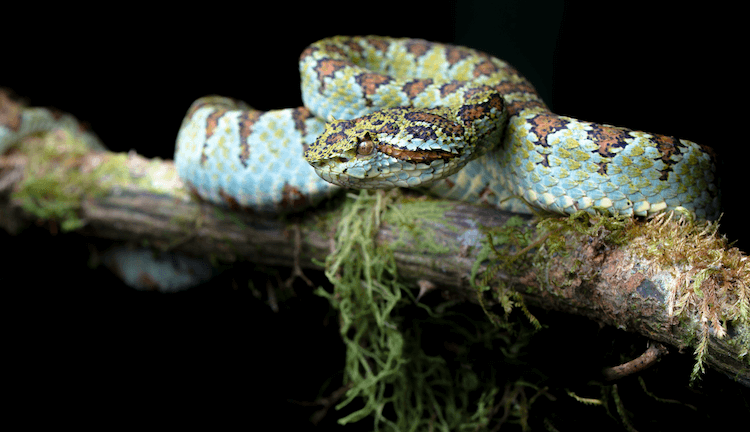 The side-striped is another venomous pit viper that can be blue.

Side-striped palm pit vipers (Bothriechis lateralis) tend to become bluer as they age. They are usually solid teal with two yellow horizontal stripes running the length of their bodies.

This species can also have a bluish gray stripe behind their eyes. 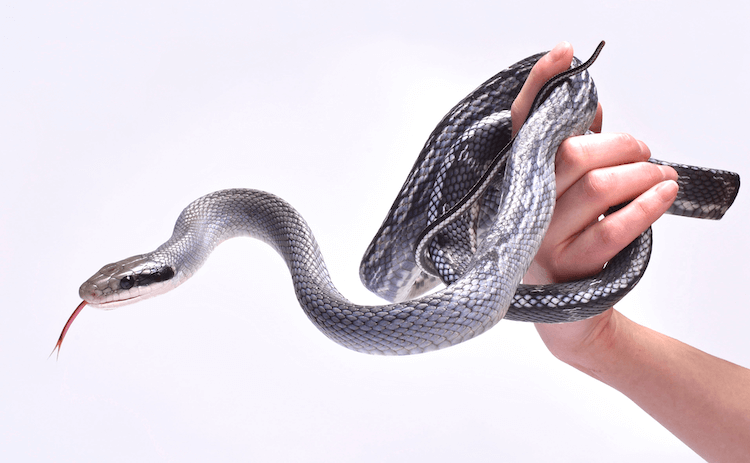 These rat snakes are a complex pattern of muted blue, gray and black with spots, stripes and mottling.

Their pattern fades into a solid gray head with a very distinct black stripe across each of their eyes. This stripe almost makes them look like they are wearing eyeshadow.

These snakes are no doubt one of the most beautiful, small blue snakes.

These snakes also have two blue stripes running down the length of their bodies from head to tail.

This species has an extremely interesting color pattern that is more than just blue. The mix of blood red, dark blue and vibrant turquoise gives them a very unique look.

These venomous snakes are found in southeast Asia and are also called the blue coral snake.

Rock rattlesnakes (Crotalus lepidus) are more subtle in color than the other species on this list.

They are normally gray with distinct black bands on their bodies, but some populations have blue undertones.

Their lighter grayish blue color has led to them also being called the Blue Rattlesnake.

Rock rattlesnakes are venomous and native to North America. 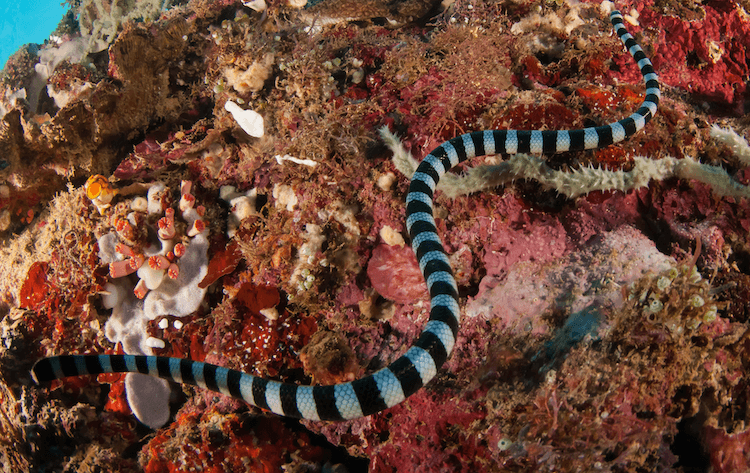 Their blue bands are very vivid and can range from Cobalt to Cerulean in color.

These beautiful snakes are entirely aquatic and are found in the Western Pacific and Indian Oceans.

Similar to other sea snakes, they are some of the most venomous snakes on the planet. 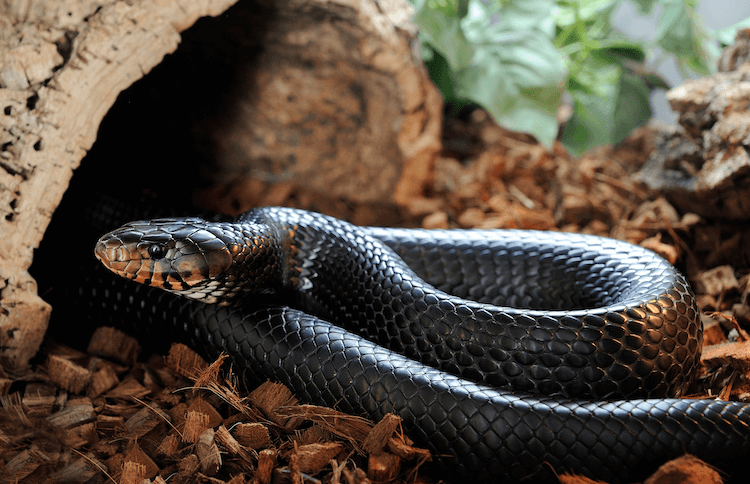 These snakes can almost look black at first glance. Some individuals are entirely solid blue, while others have a lighter orange chin with dark bluish black stripes on their lips.

The Eastern Indigo snake is found in North America, but you are unlikely to stumble upon one in the wild. They are listed as threatened in the wild.

While you may not come across an indigo snake in the wild very often, they are considered the longest native snake in the United States and can reach lengths up to 8 feet. 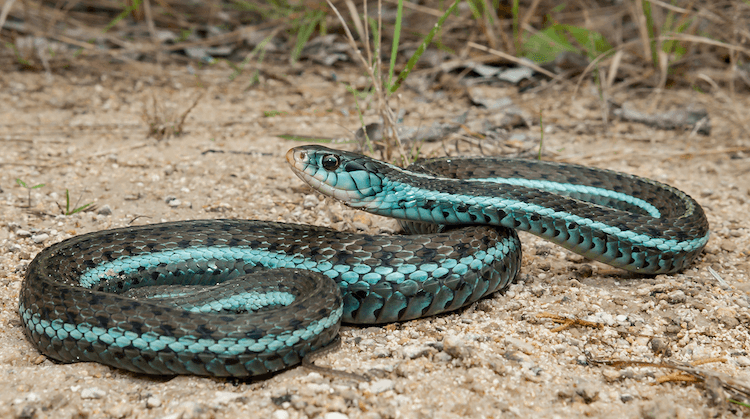 This blue snake can be identified by its dark grayish-black body and bright blue stripes running down the sides.

These bright stripes continue up onto their face and can be seen on their chin and lips.

The blue-striped garter snake is one of the smaller blue snakes on this list, adults usually only grow to 22 inches. 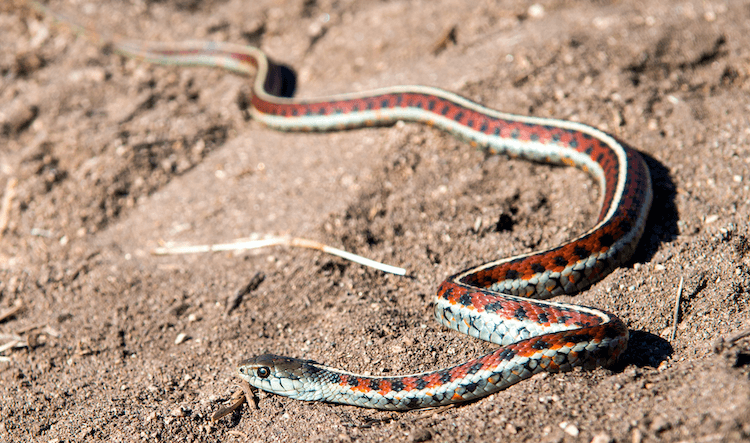 This subspecies of garter snake is found only in California.

They are popular pet snakes as they are non-venomous, easy to keep and beautiful.

Blue eyelash vipers are solid cerulean blue, though some have a black or brown speckling.

Eyelash vipers are known for their unique eye scales, giving them the look of “eyelashes”!

These venomous snakes normally only reach between 22-35 inches long and are found in Central and South America.

Many people don’t know that there are more than 15 different types of blue snakes!

These snakes cover a wide variety of ranges, but one thing they all have in common is their beautiful shades of indigo, navy and turquoise.

These snakes likely use their coloration for camouflage or warning.

While blue isn’t a particularly common color, you may have seen some of the most famous blue species, like the white-lipped island pit viper.

If you live in the US, you may have also seen the deep navy-blue indigo snake.

It is hard to deny that these snakes and their varying shades of blue are extraordinarily beautiful. 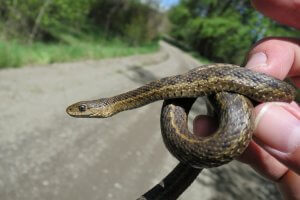 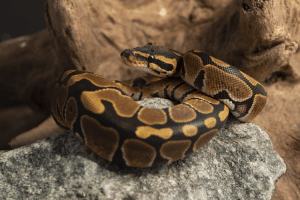 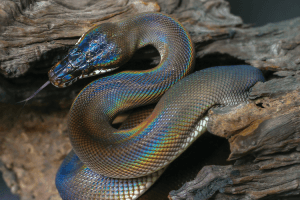