Raising tadpoles is a fun hobby for people of all ages!

It is an especially great activity for parents and children as it is cheap, easy and simple. It also is a great way to teach kids about local ecosystems and basic biology.

Keeping tadpoles is also very rewarding as you watch them metamorphose into frogs. During this time they will grow arms and legs, grow lungs and undergo many more physical changes.

Keep reading to learn how to collect frogspawn, set up your tank, raise healthy tadpoles and feed them… 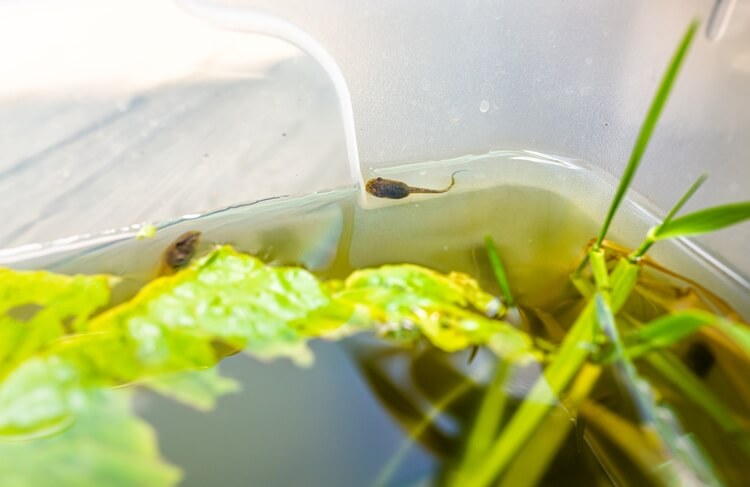 Tadpoles are the larval form of a frog. The larval stage of their life cycle is the form that happens before they become adult frogs. Tadpoles hatch from frogspawn and over two to four months metamorphose into frogs.

The process they use to change into frogs is called metamorphosis. During this time they will grow arms and legs, reabsorb their tails, change their mouthparts, lose their gills and grow lungs. Luckily it is quite easy to tell when your tadpole has developed into a froglet because they will lose their tail.

Female frogs normally lay their eggs (aka “frogspawn”) in the spring. The number of eggs a frog lays varies greatly and depends on the species.

For example Pacific Tree Frogs (Pseudacris regilla) which are commonly raised from tadpoles in California lay about 400-750 eggs per season. These eggs are laid in clusters of 10 to 80 and are attached to plants in shallow, nonmoving water.

On the other hand blue poison dart frogs (Dendrobates tinctorius), which are often sold as pet tadpoles, lay just 5 to 6 eggs at a time.

All females typically lay their frogspawn where it won’t dry out, usually in water. Shortly after male frogs then come along and fertilize the eggs. The eggs develop and hatch into tadpoles about 10 days later.

When tadpoles hatch they have round bodies with a sucker-like mouth that is similar to a catfish. They also have a wide tail that propels them through the water when they wiggle it from side to side. Interestingly at this point they have absolutely no arms or legs.

Tadpoles also have gills. They breathe by taking oxygen out of the water through their gills. When they are turning into froglets, their gills start to disappear and lungs develop. They then lose the ability to breathe underwater.

Most tadpoles are herbivores and eat plankton, algae and other plant material. This is why frogs usually lay their eggs around the edges of ponds in reeds and other plants. These leafy areas provide a veritable buffet for their offspring when they are born.

Interestingly most adult frogs are insectivores and carnivores so have a completely different diet. 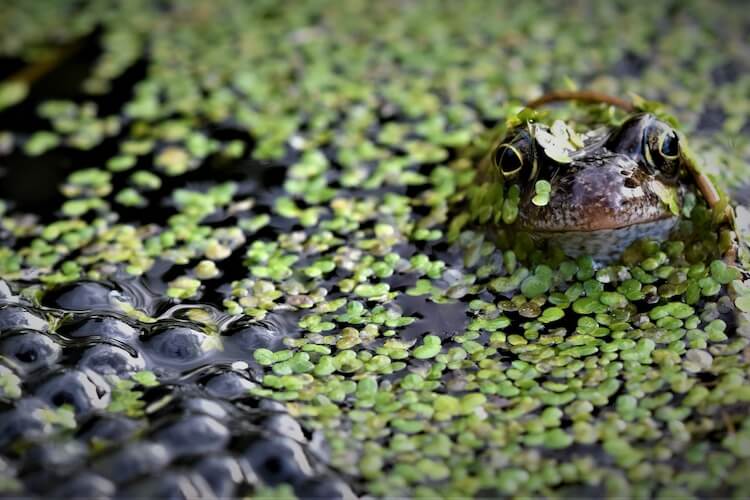 So you have decided that keeping tadpoles is something you want to try.

Take a look at the checklist below to get your supplies and tank ready to go:

Now that you have gathered all of the necessary supplies it is time to set up the tank and then collect some frogspawn. 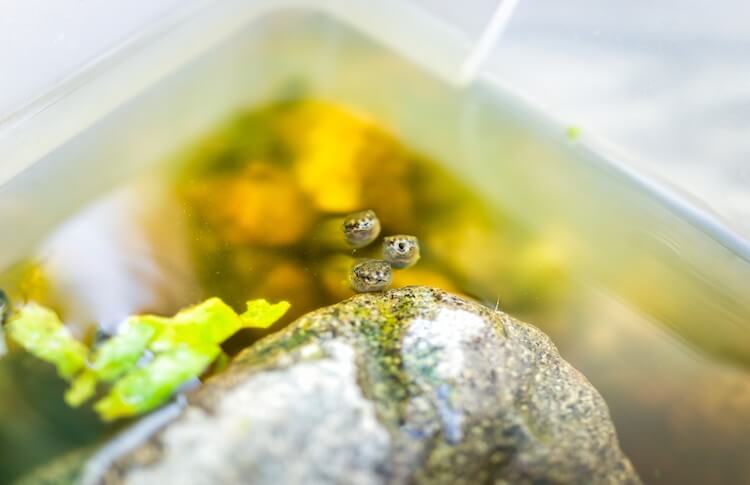 A few days before you collect your frogspawn you will need to set up the tank.

To make sure your tadpoles get enough oxygen you want to use a tank that is wider than it is deep. Plenty of surface area is important. Most hobbyists will use a 2-5 gallon tank, but a 10-gallon tank works too.

You want about a gallon of water for every five tadpoles.

Though it may be tempting to put more than five for every gallon of water, this is not a good idea. Too many in not enough water can result in a food deficit, too much waste and even cannibalism. If you want to raise more tadpoles then get a bigger tank!

Follow the steps below to set your tank up:

Once everything is set up in the tank leave it alone for 24 to 48 hours. This will give the substrate time to settle so the water is nice and clear as it will probably be cloudy from the silt of the substrate. Your tank’s water should be ready for frogspawn in about 48 hours. 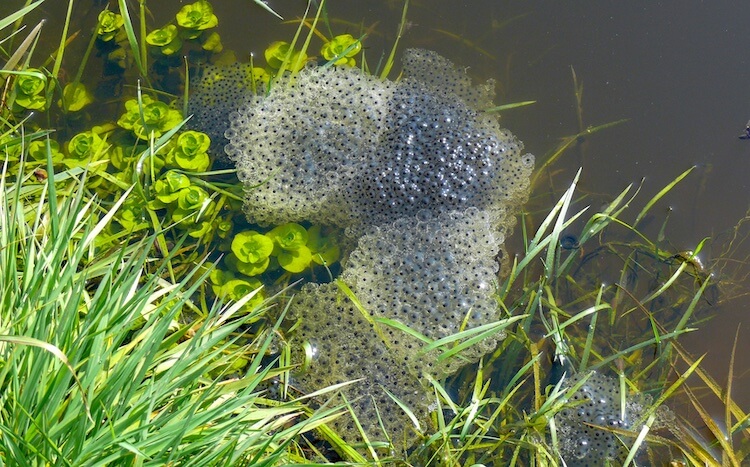 Frogspawn is a collection of frog eggs and it is easy to identify.

Many frogs lay hundreds of eggs that all clump together in one jelly-like mass. When the eggs are all grouped together in frogspawn, it looks like slightly-transparent, lumpy, spotted jelly. The eggs have no shells and look like a clear ball with a dark spot at the center. Each egg is about the size of a small pea.

Different species of frogs spawn at different times of the year, but it usually happens in the spring.

The best time to collect frogspawn is before or after the heat of the day. Try it during the late morning or early afternoon. This will minimize the risk of the frogspawn overheating as you take it back home.

You should look for frogspawn around the edges of ponds or gentle creeks. It is usually laid in reeds at the surface or just below the surface of the water.

Be careful as the edges of the ponds where frogspawn is usually found can be muddy and slippery. It is very easy for a misplaced step to result in an unplanned swim!

Once you have found some frogspawn, find the most stable location at the edge of the pond to collect it. Depending on the spot you can sit, squat, or even lay on your stomach to safely collect the spawn:

Before placing frogspawn in the tank make sure the water is around 70°F. This is a comfortable temperature for many tadpole species, but a change of a few degrees on either side is okay. You can use an aquarium thermometer to make sure the temperature is okay.

Maintaining a constant temperature will ensure that your tadpoles are happy and comfortable.

Once you arrive back home you will need to place the frogspawn in your tank:

In less than two weeks your tadpoles will have hatched and will be swimming on their own. Keep on reading to learn just how to take care of your new froggy friends. 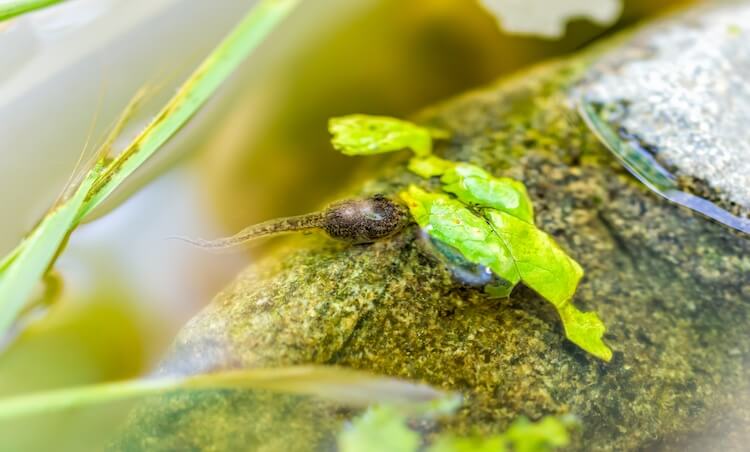 It takes between 10 and 20 days for frogspawn to hatch.

During the first few days you will see the dark spots at the center of the egg elongate and take the shape of a tadpole. After a week you will see little tadpole forms wiggling around in the clear eggs.

Over the next 10 days there is not much you need to do for your frogspawn other than watch.

Once tadpoles hatch they continue to survive off of their egg yolk for about four days. They have a yolk sac that gives them their nutrients while they are in egg-form. You can give them food during this time, but remove any uneaten food after 12 hours to prevent it from rotting.

If your tadpoles are spending a lot of time near the surface a week after hatching it may be an indication that there is not enough oxygen in the water. To add more oxygen you can perform water changes multiple times a week.

Use a turkey baster to perform weekly water changes by removing ½ tank of water. Be careful to not accidentally suck up any of the tadpoles when you are removing the water! Use spring water that is at room temperature (around 70°F) to replace the dirty water. Pour the water in very slowly on one side of the tank so you do not disturb them. 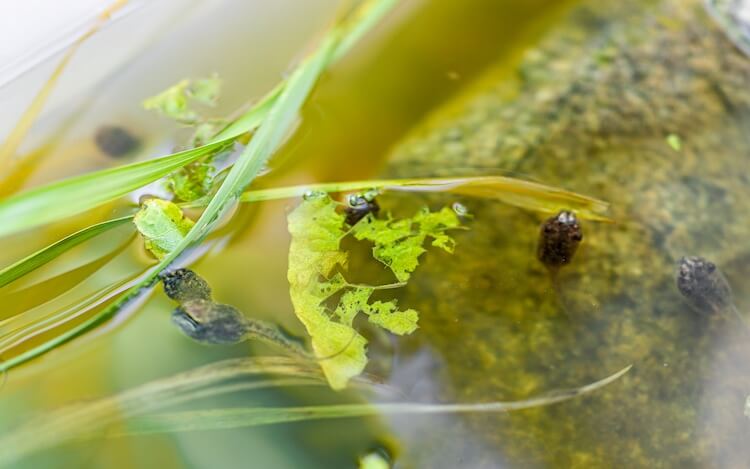 Once your tadpoles have hatched they will be hungry and ready to grow.

Newly hatched tadpoles can survive off the nutrients from their yolk sacs for a few days, but you should still provide them with food within 48 hours of hatching. The tadpoles will eat algae off of the rocks and leaves you put in their tank. You should also give them a small piece of lettuce each day.

Tadpoles grow quickly and the amount of food they need to grow increases with their size!

Keep an eye on how much they are eating and add more food to their daily meals when needed.

Feeding tadpoles is simple as they are primarily herbivores: 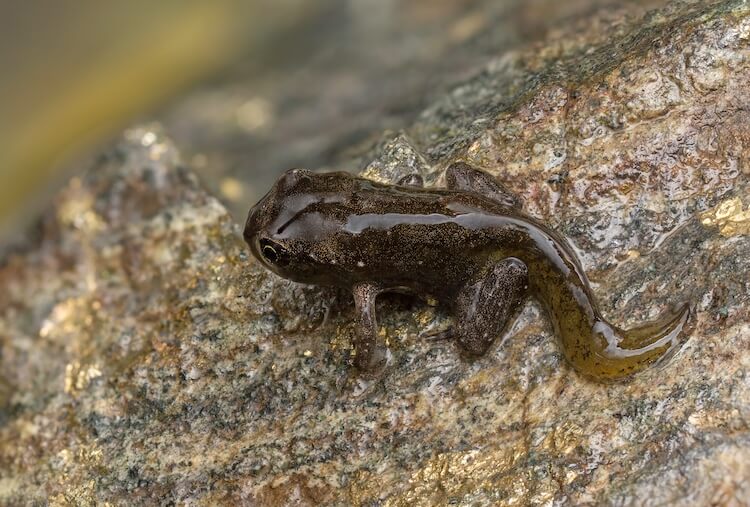 Metamorphosis is the most exciting stage for hobbyists. Many beginners immediately ask how long does it take tadpoles to turn into frogs?! Most of your tadpoles should turn into frogs within two and a half months after hatching.

Four weeks after hatching the back legs of tadpoles turn into froglet legs. The front legs follow about three weeks later.

Your tadpoles will start to walk out of the water once all of their legs are developed, even if they have not fully absorbed their tails yet.

When the nubs of the front legs first appear it means the lungs are growing and the gills vanishing. At this point it is very important that you provide dry land for your tadpoles. Providing them with dry land will stop them from drowning when they can no longer breathe underwater:

Raising tadpoles can be an extremely valuable and fun experience!

From collecting frogspawn, to watching tadpoles transform into froglets and releasing them back into the wild there is lots to learn. It can also be a great teaching opportunity for kids and help connect them with nature.

Tadpoles are easy to raise as long as you have the correct setup.

Stick to the basic rules of a gallon of water for every five tadpoles and make sure the water is around 70°F. Feed small pieces of lettuce about half an inch wide a couple of times a day after they hatch and do not forget about regular water changes!

Most important of all, have lots of fun watching them eat, grow, and transform into frogs!

You now have all the knowledge you need to raise tadpoles! Let us know how you get on in the comments. 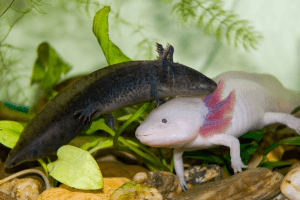 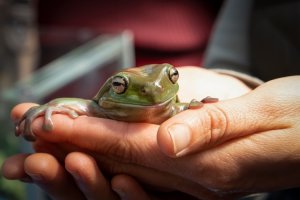 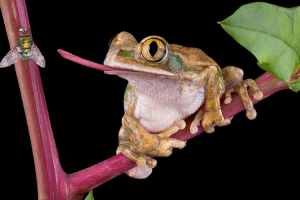