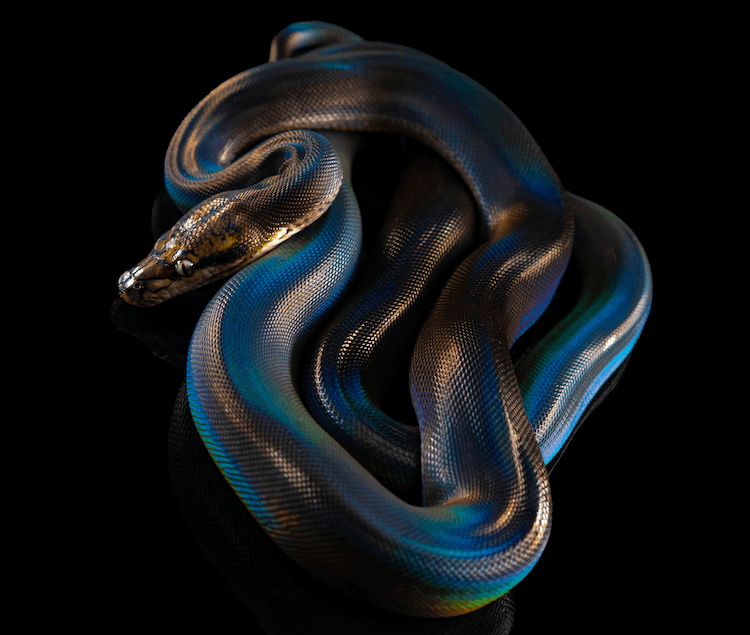 A reticulated python was shown in an Instagram video by The Reptile Zoo in California last year. The video quickly went viral as it showed a snake shimmering in the sunlight. Since seeing this rainbow snake, many people have wondered about this mysterious reptile.

Have you seen this rainbow python? Why did that snake have an extreme shine? Are rainbow pythons real? How many kinds are there? Keep reading for answers to these questions as we give a full explanation of the facts behind these snakes.

Is A Rainbow Python Real? 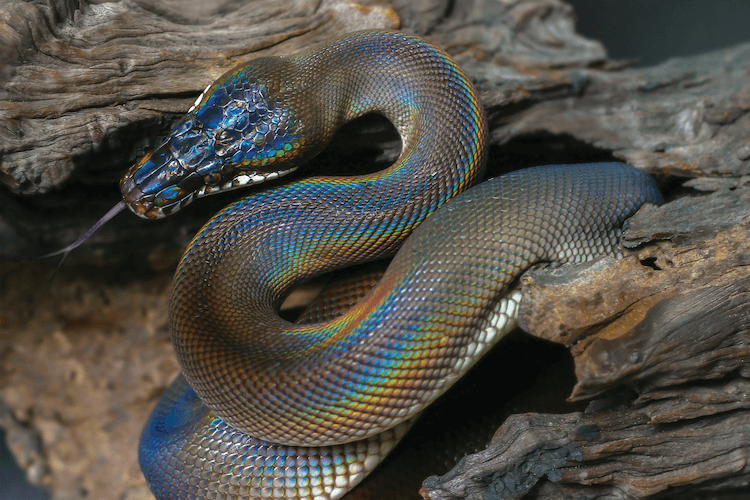 The rainbow python is a real snake.

In fact, there are several different types of rainbow python that can be found in the wild and in zoos.

Reticulated, white-lipped and rainbow royal pythons are just a few types of rainbow snakes that have iridescent colors.

These snakes get their iridescent shine from the structure of their scales.

Rainbow pythons have microscopic, crystalline formations in their scales that catch light and scatter it. These light-scattering crystals create a shiny, rainbow look in a similar way to how soap bubbles create colorful swirls.

Some species are naturally iridescent, while others have been selectively bred to create this look.

The reason why some snake species evolved iridescence is still not well understood.

Some herpetologists believe it helps with camouflage or temperature regulation, while others say that the light-scattering crystals support the scales and keep them water resistant.

Rainbow pythons are in high demand from breeders and hobbyists who want a chance to own an iridescent snake.

The most common type of rainbow python for sale is the rainbow royal python. This is a type of ball python morph with a faint iridescent shine and lilac, yellow, gray-green, and orange colors.

Another type is an iridescent reticulated python.

Wild reticulated pythons are iridescent, though the shine only appears in direct, bright sunlight. Breeders selectively bred for this trait and produced iridescent pythons that are exceptionally colorful. These rainbow snakes are very rare and only kept by zoos or highly experienced reptile keepers.

The white-lipped is a species with a natural iridescence, meaning they were not bred for this particular trait. White-lipped pythons are not a common pet snake because of their aggressive temperaments.

Why Have They Gone Viral?

Rainbow pythons have always been popular with hobbyists, breeders, and snake collectors, but they went viral last year thanks to a video featuring a stunning example of the reticulated python rainbow morph.

The beautiful snake, named MyLove, was bred at The Reptile Zoo in California and revealed in an Instagram video.

She instantly became an online star thanks to her incredible iridescence and black scales.

MyLove is considered a rainbow morph because she is much brighter than wild snakes.

Her colorful hues were so strong that some people called the video a hoax! Such a high degree of iridescence in a reticulated python had never been seen before.

MyLove was bred by crossing two other reticulated morphs: the motley and the golden child.

The motley morph is characterized by metallic, circular markings on the head and back, a dark body color, and minimal side patterns. Motleys are often muted colors of olive, gray, and black.

Golden child morphs have a noticeable iridescence and geometric markings on the top of the head. Some have a faint, shattered pattern on the back, while others have no pattern at all.

MyLove’s unique colors are in part caused by a lucky combination of genes that haven’t been reproduced.

Many breeders are attempting to recreate MyLove’s viral colors.

Other golden child motley reticulated morphs have been bred and can sell for over $1,500, though so far none have had the same brilliant rainbow shine as MyLove.

What Species of Rainbow Python Exist?

Not only are rainbow pythons real, but there are actually several different species of snakes that share this beautiful color.

A rainbow python can be either a species or a morph, depending on the type of snake.

The Brazilian rainbow boa, white-lipped and Boelen’s python are all species with a naturally occurring iridescence. These snakes evolved iridescent scales over time and naturally have these colors in the wild.

On the other hand, rainbow reticulated and royal pythons are the result of selective breeding and are known as morphs. These morphs have a genetic mutation that does not occur in regular (or “wild-type”) members of the same species.

The viral reticulated python MyLove is the result of selectively breeding. She was bred by the owners of The Reptile Zoo in California, who specialize in creating exotic morphs.

MyLove’s iridescent colors are an amazing example of what the right combination of genes can do.

Currently, other breeders are attempting to recreate her rainbow appearance. However, the complexity of breeding this morph means that these snakes are still quite rare. The rainbow trait is more difficult than other color morphs to develop because it involves changing the structure of the scales to reflect light in just the right way.

The Brazilian rainbow boa is the most popular pet species of rainbow snake.

Rainbow reticulated pythons are the world’s longest snake, so they are only suitable for highly experienced owners. They can reach lengths of up to 21 feet and weigh up to 165 pounds. They are extremely strong constrictors that are large enough to eat pigs and deer.

Where Can You Find Them?

True rainbow species are found near the equator.

The white-lipped python is found in the low forests and shrublands of New Guinea and its surrounding islands.

Boelen’s python is also native to New Guinea, though its range is restricted to the mountains in the middle of the island.

The Brazilian rainbow boa and its 5 subspecies live across Central and South America, including Costa Rica, Panama, Brazil and northern Argentina. These colorful snakes live primarily in dense jungle, but are sometimes spotted in open savannas.

MyLove, the viral reticulated python, was hatched at The Reptile Zoo in Fountain Valley, California. Reticulated pythons are not native to the United States. These large, tropical snakes are found in rainforests, woodlands, and shrublands in India, Bangladesh, Indonesia, Malaysia, and the Philippines.

Most rainbow pythons are bred and raised outside of their native habitat.

If you want your own rainbow snake you will have to look to buy one from a breeder online or at a reptile expo. You are not likely to find one for sale at a local pet store.