Snakes have become one of the most popular pets in the United States. They come in so many sizes, colors, and patterns that there is a snake for everyone.

Many people assume that snakes are expensive pets. But, the truth is, they are some of the easiest and cheapest pets to keep.

Have you ever wondered how much snakes cost to buy?

In this article, we share the price of the most popular pet snakes. We also share the monthly cost of keeping a snake so you know exactly how much it costs.

How Much Is A Snake? 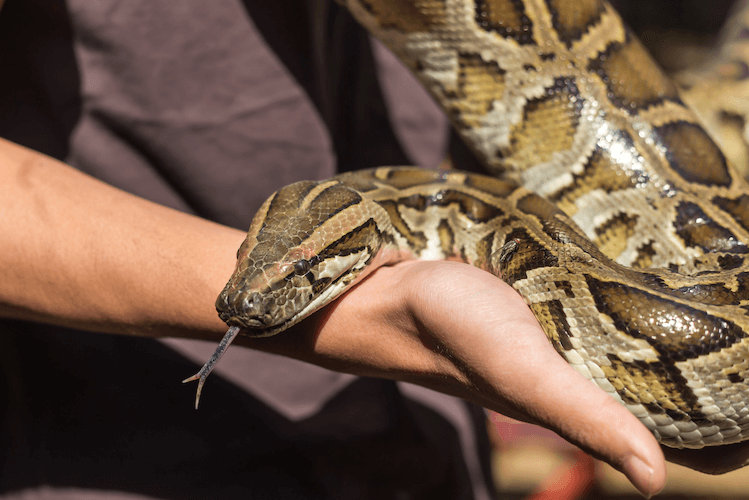 Most pet snakes are easily bought from breeders or pet stores for between $25 to $300.

The cost of a snake is normally influenced by the species, morph, breeder, and location.

A Dragon snake is a good example of this. These snakes are beautiful, but nearly impossible to keep alive in captivity because they are so fragile. Their fragility makes their husbandry and breeding very difficult.

The morph of a snake also affects its price.

Certain species of snakes like ball pythons are available in different morphs (i.e. different colors and patterns). Some morphs are harder to breed, which makes them rarer and increases their cost. The popularity of the morph and how difficult it is to breed are the two biggest factors driving price.

Standard ball pythons can usually be purchased for around $50, but a Blue-Eyed Leucistic ball python morph can sell for as much as $1,000. Other morphs, like the bumblebee ball python, are easier to breed, but, because of their popularity usually cost around $450.

Aside from snake species and morph, the breeder of a snake can also influence the cost.

Well-known breeders can charge more for their snakes due to their reputation. Good breeders who consistently breed healthy, more vibrant snakes are hard to find.

Generally pet stores sell snakes for less because they come without any knowledge of how they were bred and who bred them. Usually, paying a little more to buy a snake from a reputable breeder will ensure that you are getting a healthy snake that has been properly cared for.

Finally, in the United States, it is usually easier and cheaper to buy snakes in southern states. People who live in northern states may have more difficulty finding snakes for sale, especially in Alaska.

It is more difficult to safely ship snakes to cold states. It requires extra heating packs and well-insulated packaging, making it more expensive. It also puts more stress on the reptile being shipped in cold weather.

How Much Is A Ball Python? 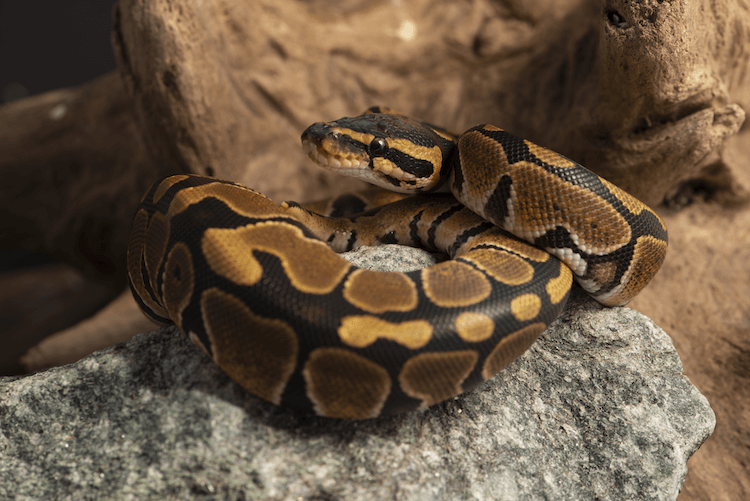 Ball pythons are the most popular pet snake in the United States. They can be as cheap as $50, or as expensive as $40,000. There are currently around one thousand ball python morphs, and this is the main reason for cost differences.

Normal wild-type morphs can be purchased for around $50-$100, depending on the breeder and the age of the snake.

Morphs like the lemon blast, pastel, or albino that feature brighter yellow markings can cost from $200 to $500. The most expensive ball pythons ever sold was a lavender albino ball python. This morph was first bred in 2001 and sold for a whopping $40,000!

How Much Is A Corn Snake? 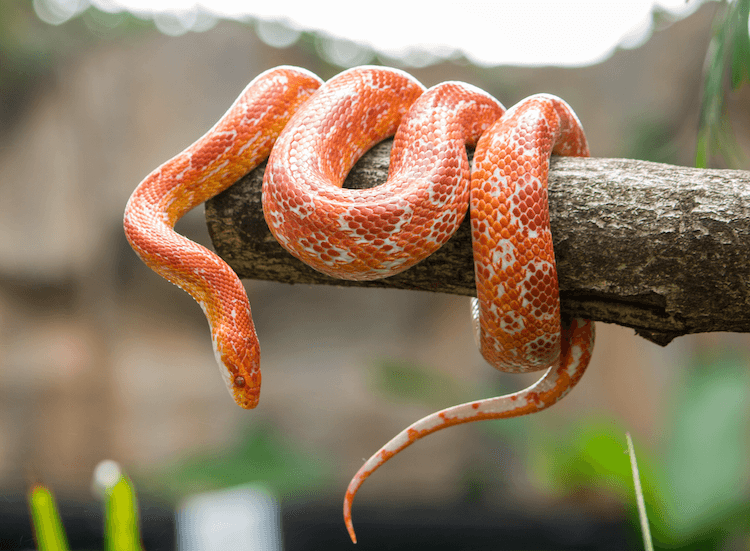 Corn snakes are one of the most popular beginner snakes. They stay relatively small, and come in a variety of beautiful colors, including red, brown, and albino. These snakes are easily found at many pet shops and usually sell for $25-$150.

Normal morphs with a reddish-brown base color and red spots are the cheapest. 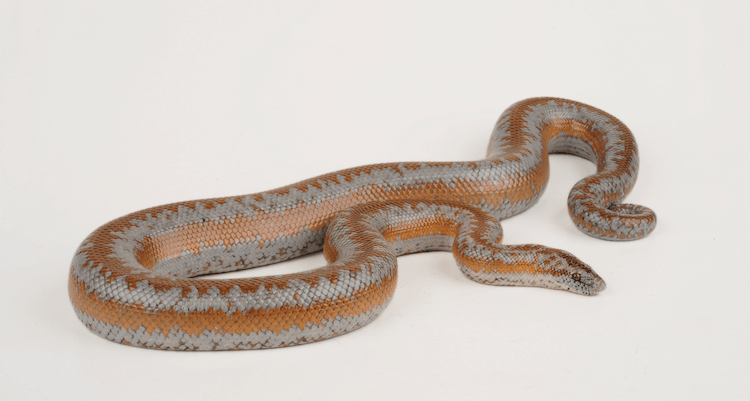 The rosy boa is one of only two boa constrictors native to the United States. They have a much better attitude than many of the boa species. This makes them an excellent beginner snake, especially for those who want to keep a constrictor.

The most expensive rosy boa morph is the snow morph. They are similar in appearance to the albino morph, but generally have a purer white color.

How Much Is A Boa Constrictor? 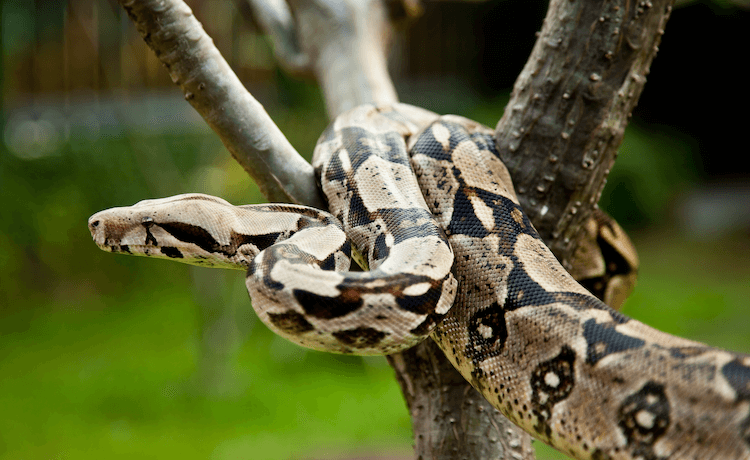 The common boa constrictor is a great species for a beginner that wants a large snake. This boa can grow to reach nine feet in length.

Common boas are easy to find at some pet shops and reptile expos for between $150-$300.

There are many different morphs available, with some of the more popular morphs including the hypo (a morph that has less pigmentation than other morphs), the albino, and the motley. 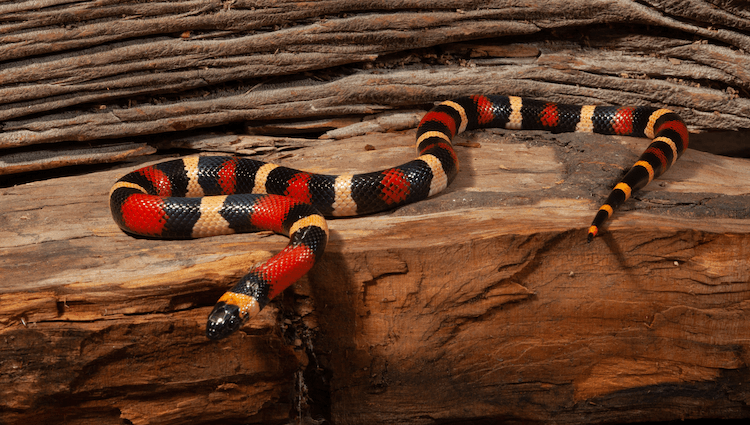 Milk snakes, along with corn and gopher snakes, are one of the easiest pet snakes to handle. They come in a wide variety of colors, but the normal morph features a red body with black and yellow banding. You can also find them with pink and orange banding or with almost no banding.

How Much Are Hognose Snakes? 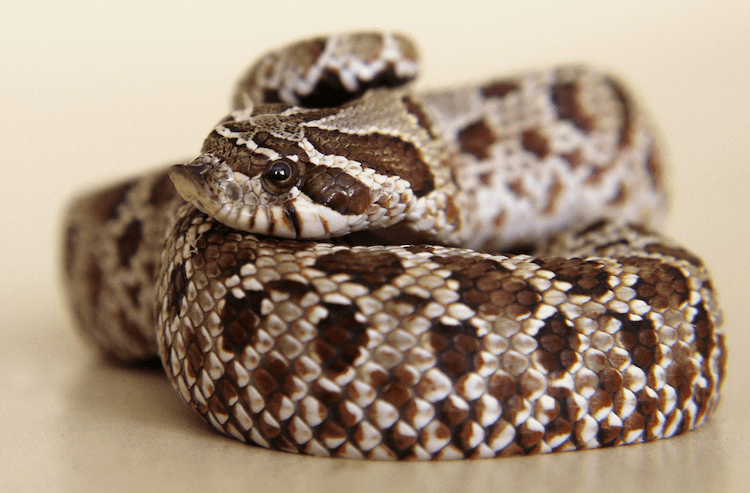 The Hognose snake is an adorable species that many reptile keepers are familiar with. With their color variety, cute upturned noses, and their defensive act of playing dead, it is no wonder this species is so popular.

Hognose snakes usually cost between $200-$700, depending on the morph. The super anaconda morph is usually one of the most expensive because it is really hard to breed and can take several generations to produce. 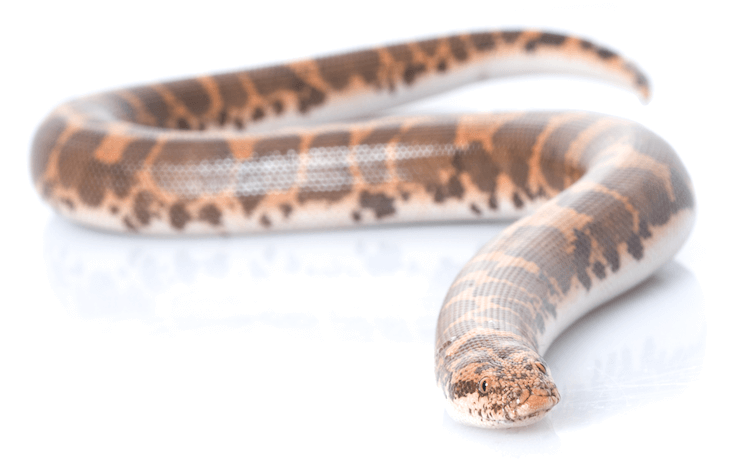 Kenyan sand boas are one of the most unique boas for sale. Their bodies are tube-shaped, tapering off at the tail and head. They don’t really have a neck, and many people find this irresistibly cute.

Like ball pythons, this snake has a really wide price range due to the number of morphs. You can usually find Kenyan sand boas for between $130-$500.

The more difficult the morph is to find, the more expensive the boa will be. There is a very wide variety of Kenyan sand boa morphs available, including the albino, calico, nuclear, and snow paradox. Sand boas with the paradox gene usually cost more.

How Much Do Garter Snakes Cost? 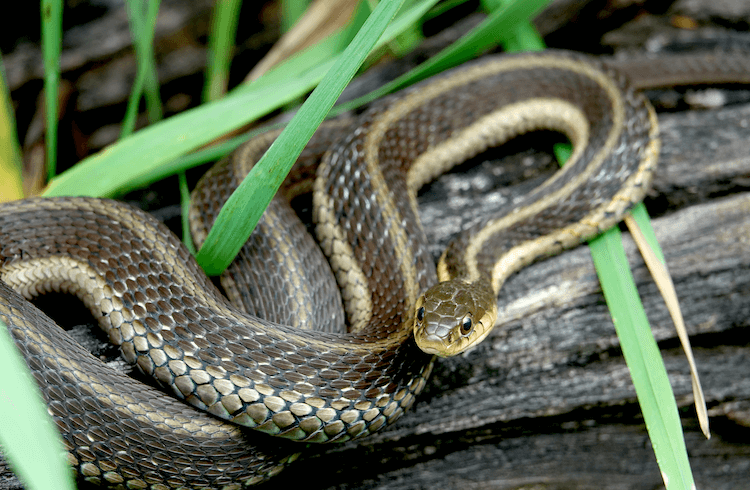 Garter snakes are a slightly less popular species when compared to corn snakes or ball pythons. However, they are still a great choice for keepers of any level. These pretty snakes can be purchased for between $20-$350.

Before buying a garter snake, be sure to ask the breeder if it is wild caught or captive bred.

Is it safer, healthier and more ethical to go for captive-bred.

Many common garter snakes are collected from the wild and brought into the pet trade. They are listed on the IUCN red list as a species of least concern, meaning it has high wild population numbers. 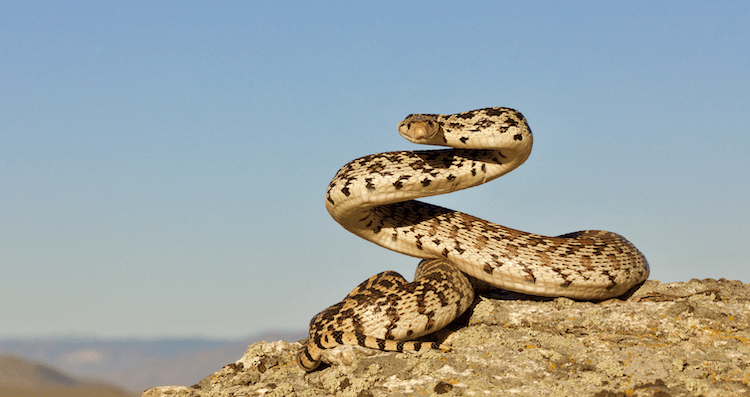 Gopher snakes are another species that can be commonly found in parts of the US. These snakes are commonly mistaken for rattlesnakes due to their patterns, but their teardrop shaped heads and round pupils are an easy way to tell them apart.

These snakes have one of the best temperaments of any pet snake, making them very popular. Because of this, they are usually sold for between $100 and $300.

Gopher snakes are not as common as some of the other beginner snakes, so you may have to travel to a large reptile expo to find one for sale.

Cost Of A California Kingsnake

These snakes are easily found in pet shops or reptile expos. They are usually docile-tempered and easy to handle, making them good snakes for beginner reptile keepers. 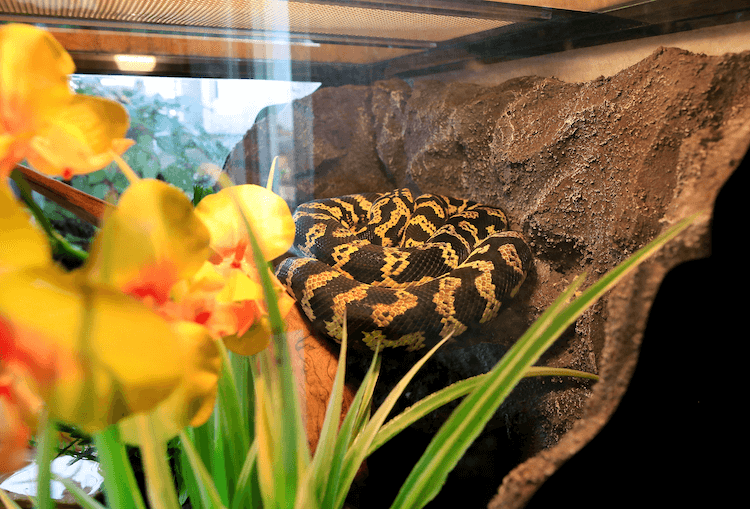 Snakes are usually cheaper to keep than other pet reptiles like lizards or turtles. However, this does depend on the species of snake you buy and their age.

A basic snake cage and setup will usually cost around $500 and $75 a month will be needed for food, substrate and electricity bills.

Younger snakes need to be fed more frequently, which makes them cost more. Larger species are usually more expensive due to their expensive setup and electricity bills.

Your snake’s enclosure will likely be the most expensive one-time cost. The size of the enclosure you need will be based on the snake you buy. A general rule of thumb is to be sure that, when full-grown, your snake will be able to completely stretch out its body over the floor length and height of the enclousure.

For most beginner snakes, like the ball python or corn snake, a 55-gallon tank is perfect. A 55-gallon tank and lid will cost about $150-$250, although you might be able to find a used tank for less.

After you find an enclosure, you will need to decide what type of heating system you want to use. Many beginners pick under-tank heaters, like heating mats, as they are cheaper and do not need to be replaced as frequently as a heating bulb. A heating mat will cost around $30 vs a heating bulb and dome for $40.

Finally, you will need a shopping bag full of substrate, a water dish, a hide, and some branches or other décor. Combined, this will probably cost around $60.

After you have setup the enclosure, you will then see why snakes cost so little to keep.

Depending on the type of snake you buy and its age, this will cost anywhere from $75 to $100 per month. The only reoccurring monthly costs will be for food (i.e. prey), UVB bulb (if your snake requires it), substrate and heating costs.

You should now have a very good idea of how much snakes cost.

Most pet snakes are sold for between $25 to $300. The price will vary greatly from species to species and from morph to morph, but most are around $100! Corn snakes are the cheapest pet snake at just $25.

A basic setup for a snake will usually cost around $500. You will then need to spend $75 a month on food, substrate, lighting, heating and electricity bills.

We hope you find this article helpful when deciding if you can bring home a pet snake.

If you did decide to adopt a snake, make sure to check out our top 1,000+ best snake names!