Ball Pythons are one of the first species that come to mind when people think of pet snakes. They are great for beginners, easy to keep and very sociable.

The only thing that gets in the way of first-time owners is wondering, how big will a Ball Python get?

A common myth is tied directly to their name, python. The first thought that comes to mind is the giant Python species from the Amazon. But, Ball Pythons are actually much smaller!

Want to know exactly how big your snake will get? Keep reading to discover our ball python growth, size and weight charts…

How Big Do Ball Pythons Get? 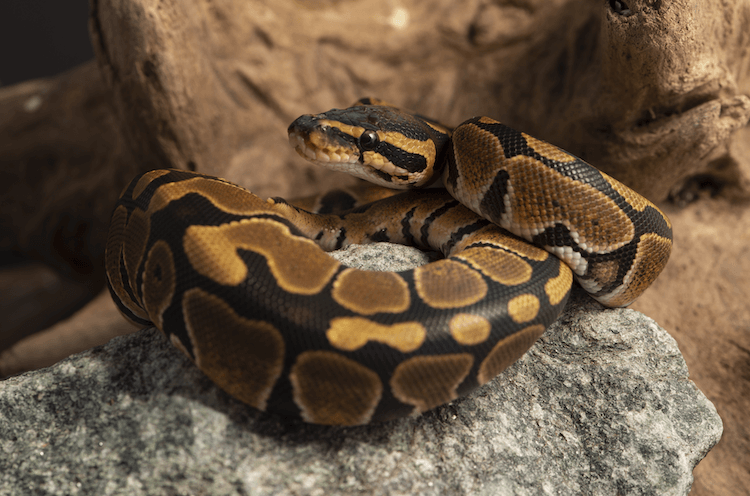 A Ball Python will reach its full-grown size between two to three years old. Most pet Ball Pythons will grow at least three feet long. A male will typically top off at only 2.5 to 3.5 feet long, while a female can grow anywhere from 4 to 6 feet long.

Both sexes are fully grown within three years.

Provided they are on a consistent feeding schedule, housed in a suitable tank and receive good care most will grow to three feet within three years.

Their rapid growth may seem intimidating, but they are actually a small species of snake.

There is a large size difference between male and female Ball Pythons. This is known as sexual dimorphism. Females will always be bigger and grow faster than males.

The difference in ball python growth rates between a male and female is noticeable.

The chart below will show the average ball python size for male and females:

Right out of the shell hatchlings will typically range between 10 to 17 inches! Males and females are similar in size and are not noticeably different from one another.

Ball Pythons that are between the age of 6 and 9 months are known as juveniles. At this age, females start to become noticeably bigger.

Males will range between 20 to 25 inches. Females will already be five inches longer at between 25 to 30 inches. 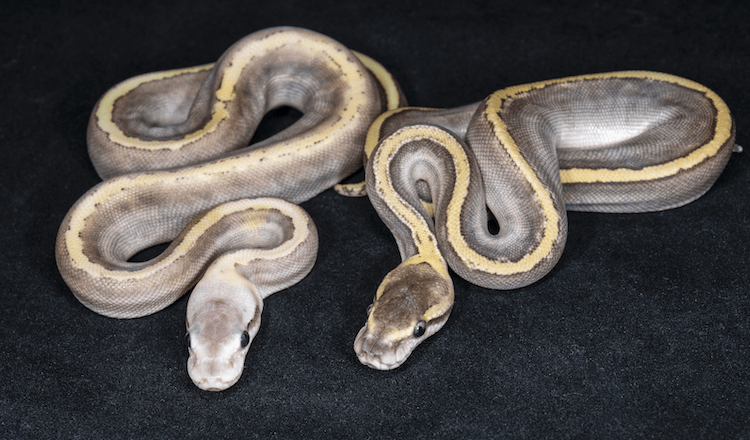 A sub-adult is a snake that is not yet sexually mature; they are aged from 9 and 18 months.

By the time they have reached one year old, you may notice that they have completely doubled in length and weigh ten times more!

A male will reach sexual maturity faster than a female. He will be about 3.5 feet and weigh around or close to 1500 grams.

Females reach maturity later, but will be almost twice the size of a male. A female’s full length will range between 4.5-6 feet and can weigh anywhere between 2000 to 3000 grams.

A Ball Python will reach adulthood around three years of age, and this goes for both sexes. But, this is only true if they are being fed regularly and receive good husbandry.

Female Pythons will reach adulthood at around three years old and will be around 4 to 5 feet long, weighing in at four to five pounds. Some are known to grow to six feet and be a little heavier than this, but this is rare. She will be longer and stockier than her male counterpart.

A male will reach adulthood sooner than a female at around 18 months. A male ball python size will only be around 2 to 3 feet long, weighing in at three pounds.

There are a lot of factors that can impact your adult Ball Python’s size and weight. These factors are usually:

The biggest influence on Ball Python size is their sex. Females will always be bigger than males being at least one foot longer, but normally two.

Tank set up and habitat are a close runner up. The most important factor here is enclosure size. The size of an enclosure should be the same length, or more than your snake. Your snake should be able to stretch out fully without having to bend the bigger parts of its body.

Tank sizes will vary depending on how old your Ball Python is:

Their tank should also have a basking spot of 85 to 90 degrees with a proper heat gradient so it can properly digest food.

Regardless of if you are feeding your Ball Python mice or rats, a consistent feeding schedule is very important.

If you are feeding mice to your Ball Python at a young age, it will not grow as quickly, but will maintain a healthy body weight. If you feed small rats, your snake will grow quickly, but it will also be at risk of obesity due to overfeeding.

How Fast Do Ball Pythons Grow? 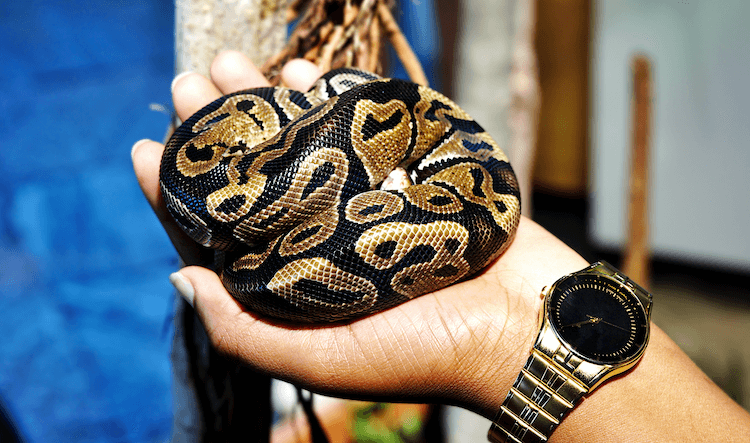 Ball Pythons will do most of their growing in the first year. You can expect a lot of sheds and will quickly find out an appropriate feeding schedule. Hatchlings and sub-adults will typically shed once a month due to the rapid growth rate of a Ball Python.

A male will typically grow about 8 inches per year, while a female will grow between 12 and 16 inches a year and will gain around 50 grams or more each month. A female will grow 1.5x faster than a male.

A Ball Python will reach “adulthood” around 1 to 2 years old, and it is during that time period that they will do most of their growing.

Adulthood in snakes can be categorized in two ways, sub-adult and adult.

Smaller weights and sizes are easier for beginners to handle. It can help a new snake owner gain confidence with handling and feeding.

How Long Does It Take For Them To Reach Full Size?

Everyone has heard the rumor that snakes never stop growing, and it is true. They never really stop growing, but they do slow their growth down as they mature. This is known as indeterminate growth.

Ball Pythons will grow extraordinarily fast in their first year.

Female Ball Pythons will usually be longer and larger than the males.

It will take between two to three years for a male to reach full length and maturity. A female will take three to four years to reach her full grown size and maturity. These time periods may vary due to the individual snake and other factors such as feeding, husbandry and general health.

A ball python’s growth will slow down considerably once they reach full size and adulthood.

Reasons Why A Ball Python Might Not Be Growing

A Ball Python may not be growing due to a few reasons, but diet is normally the main cause.

If a snake is underfed, or is only fed enough to maintain its bodily functions, then it won’t grow as quickly as it should.

First-time owners should always use a feeding schedule. Keeping track of how often and how much you are feeding will help. You should also track how often they shed. This will be a good indicator of how old your Python is and how healthy they are.

Ball Pythons are carnivores and mostly eat mice and rats.

Their feeding schedule will change based on their age and size. You should not be feeding a large rat to hatchlings and you certainly won’t be feeding feeder mice to adult females.

Following the feeding chart below will help you choose the correct size prey to feed your Ball Python.

Some owners may find this chart needs to be adjusted depending on the ball python’s size and girth:

Beginners often think they will need to feed Ball Python live food, but that is not true.

It is strongly advised not to feed your pet snake live food and, instead, stick to the frozen mice or rats you purchase from any pet store.

Because your snake is captive bred, they never learn how to hunt properly. You will most likely be feeding them frozen/thawed mice. Feeding your snake pre-dead or frozen and thawed prey will not only be more humane to the prey but also safer for your snake.

Usually mice are fed to babies, juveniles and smaller males. Larger males, sub adult and female adults are fed rats. Smaller males will not grow big enough to be able to handle eating a rat.

One important thing that every owner needs to know when feeding their ball python. Your snake must have passed their original meal before you attempt to feed them again. Feeding them before they have excreted their food from the previous week could cause them to become constipated or cause blockages.

Obesity is a very common problem in Ball Pythons. This is often due to overfeeding and misjudging their size due to their naturally stocky build. By the time you notice your snake is looking obese, they have already stored more fat than necessary.

Some signs to watch for if you think your Ball Python may be overweight:

A method of checking the overall health and body condition of your Python is to take a good look at its girth (i.e. thickness).

Lay your snake down with its tail near you and gauge the shape of the thickest part of its body:

An obese snake will move around less, stay curled up and will look more pudgy than normal. Obesity is easiest to see when a Ball Python curls up. There will be no visible spine and very apparent rolls of fat.

If you fear your snake is getting overweight here are some tips:

Another issue that can impact how big your ball python gets is stress.

Stress is the main cause of a food strike.

It can be completely normal for a snake to skip feeding every now and then. They could be preparing for a shed or in the process of digesting and excreting their food.

However, it can become a problem when your snake refuses to eat for extended periods of time.

Do not get worried if your adult ball python does not want to eat for three or four weeks. They can actually go this long without food. However, if they are on a pro-longed food strike, try and zero in on what is causing it before going to a vet. Diet, tank size, temperature or parasites are very common reasons.

Temperature is a close second cause for a food strike, behind stress. If an enclosure is too cold then a snake will not be able to properly digest its last meal.

An underweight Ball Python will have sunken eyes, loose skin, bony jaws, and their belly may curve inwards.

Full grown Ball Pythons will always vary in size depending on their sex.

Males are typically between two to three feet and weigh only about three pounds. A full grown female will range between four to six feet and weigh roughly five pounds. Females grow 1.5x times faster than males.

How big a ball python grows will depend on their sex, feeding schedule, habitat, and exercise.

You can use the charts above for a general idea of what to expect for your ball python size and growth rate.

How big is your Ball Python? Let us know in the comments. 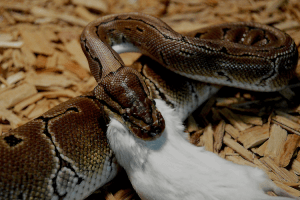 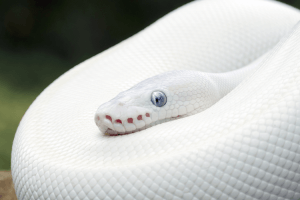 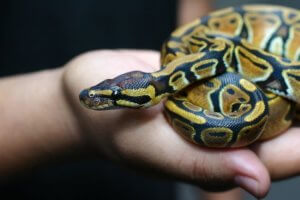 Why Won’t My Ball Python Eat? 9 Reasons & What To Do