Are you interested in a pet lizard, but want something more unique? A fancy bearded dragon may be the perfect fit. Fancy lizards are similar in care and husbandry, but come in different colors and patterns.

There are many types of fancy bearded dragons. Some are bright red with black beards, while others are yellow with bold patterning. This article explains what a fancy lizard is and the variety of morphs available. We also share the differences between them and regular (or “wild-type”) bearded dragons.

What Are Fancy Bearded Dragons? 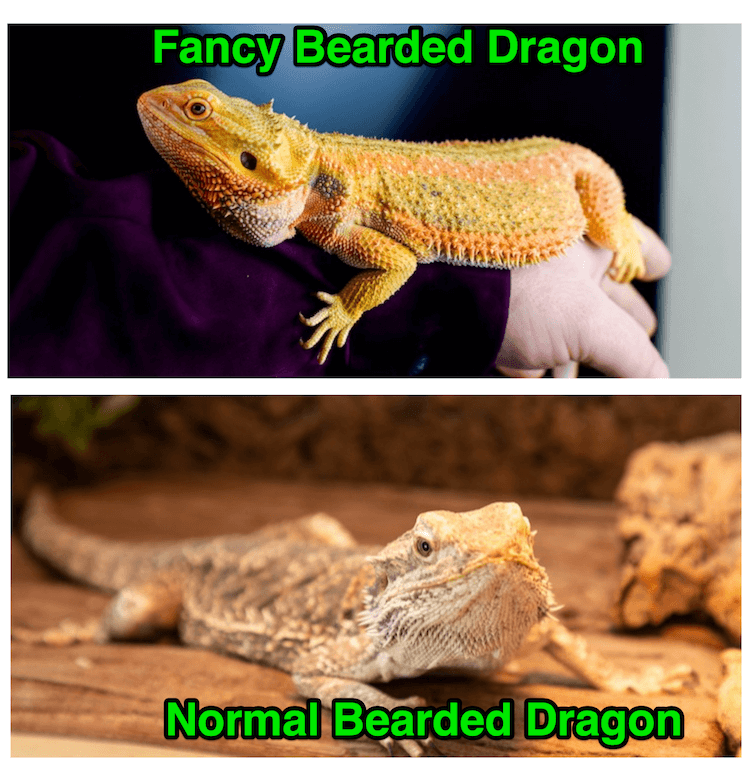 Fancy bearded dragon is the term used to describe any type of bearded dragon morph. A morph is any hatchling that has genetic traits that make them different in color, pattern, or scale texture from a normal type.

“Fancy” is an umbrella term primarily used by pet stores and outlets.

“Morphs” is used as a preferred term over fancy and is used colloquially by most breeders and hobbyists.

Normal bearded dragons are light tan to brown in color and are covered in rough, spiky scales. They are also covered in small side flukes and a spiny beard, which they are named after. Normal dragons also have dark-colored eyes and nails, a black beard which is especially noticeable in males and textured, spiky scales across the length of their bodies.

These “morphs” have enhanced colors and unique patterns.

Some fancy morphs are naturally occurring in the wild and were imported into the reptile trade for their unique looks.

Others are the result of selective breeding by reptile hobbyists. These bearded dragon breeders line-breed or outcross individuals with exciting physical differences. Their goal is to enhance these mutations and combine them in unique ways.

Any one bearded dragon can have a combination of these different genetic traits at the same time.

There are currently over 30 types of fancy bearded dragons in the pet trade.

Some morphs such as the silkie lack the standard spiky scalation of normal individuals. Others, like the tiger morph enhance the dark brown patterns into bold dorsal bands. The red monster morph is a favorite for keepers who want a bright red lizard with a vivid black beard. 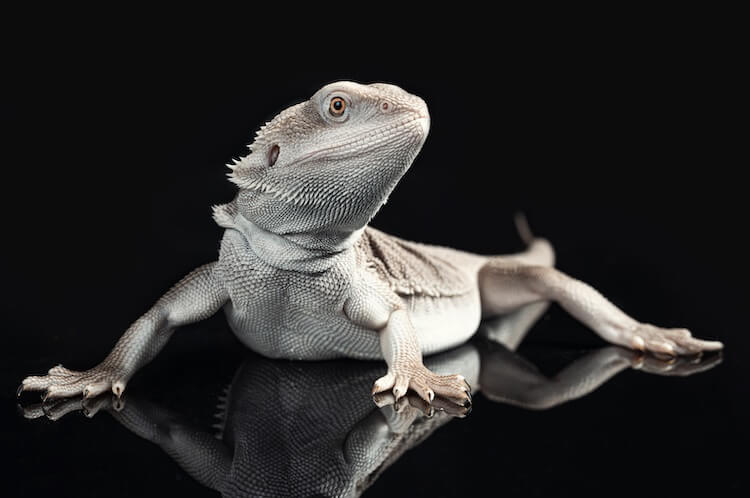 What makes a bearded dragon fancy is one or more genetic traits that affect their color, pattern, size, and/or scale texture.

The main difference between a normal and fancy bearded dragon is their appearance. Their general personality, care, tank setup, and diet are essentially the same.

To qualify as a fancy the bearded dragon must simply have an appearance that is not normal.

Their “fancy” appearance can alter their color, pattern, size, and/or scale texture.

Many line-bred morphs produce brighter colors. They come in a variety of base colors, including yellow, orange, red, and maroon, and even lavender and blue accents.

Hypomelanistic morphs are a type of fancy bearded dragon that are paler and more yellow than the normal tan or light brown. Individuals that have this recessive trait have cream-to-lavender-colored bars across their sides.

Another good example is the dunner morph. A wild-type has a pattern of loose stripes, but the dunner trait disrupts this and produces a unique pattern of spots in a semi-symmetrical pattern running from head to tail.

There are also morphs that have muted or reduced patterns.

The leatherback trait disrupts the normal pattern of rough and spiky scales and causes decreased scalation. Silky morphs have a total lack of scales, giving their skin a thin and leathery appearance.

A fancy bearded dragon can cost anywhere between $100 to $300 for a single gene trait like a tiger morph. However, some of the rarest and most unique morphs such as the red monster can cost upwards of $2,500 dollars.

This price is quite expensive when compared to a normal bearded dragon, which generally costs between $20 and $60.

A morph can be bought for less from a pet store, but they will be labelled generically as “fancy”. This means their exact traits and genetics are unknown, as this information is often lost in the mass sale and shipping of reptiles.

Buying from a breeder or reptile expo may cost a bit more than buying from a large-chain pet store, but these sources will provide a buyer with exact information on the genetics, heritage, and traits of their fancy bearded dragon.

Regardless of where you are buying your bearded dragon from, always inspect them for health issues.

A healthy hatchling will have a good body condition and appear active and alert, and lack any stuck shed or crust around the eyes. Always avoid purchasing individuals that appear sickly, lethargic, thin or injured (missing digits).

Most fancy bearded dragons will grow to the same size as their normal wild-type counterparts.

Adult bearded dragons generally grow to between 16 and 24” long and weigh 380 to 500 grams, with females tending to cap out at 20 inches.

The only exception to this is the German giant morph.

German giant morphs have been line bred by hobbyists over many generations for their giant size. German Giants grow from 25 to 30 inches, weigh up to 500 grams and are much more robust than non-giant morphs.

All other fancy bearded dragons will grow between 16 and 24” long.

Hatchlings are generally born at around 3 inches long and average 5 grams in weight. Juveniles grow quickly and can reach lengths of up to 19 inches within their first year, with males tending to grow larger than females.

Most fancy bearded dragons have a lifespan similar to a standard.

With proper care, husbandry and diet, owners can expect their fancy bearded dragon to live up to 12 years. Some exceptional individuals have been recorded living up to twice that length of time, however, 8 to 12 years is considered an average and healthy lifespan.

Fancy adults are considered just as resilient and long-lived as normal wild-type individuals.

The only exception to this rule is the German Giant. These morphs have shorter lifespans than that of their normal-sized counterparts, almost without exception. Their average lifespan is severely reduced to 4 to 6 years, though the exact reason for this is unknown.

Some breeders think they have a genetic syndrome attached to one or more of the genes that causes them to have a decreased lifespan.

Caring for a fancy is very similar to caring for a standard bearded dragon.

Typically, a baby can be housed comfortably in a 20-gallon long tank with a ventilated screen lid. This tank should be upgraded as they grow larger, typically to a 75-gallon tank for an adult.

All bearded dragons need a high-temperature basking spot, averaging about 100°F, with an ambient temperature of 80 to 85°F. Always provide a wide-spectrum UVB bulb, regardless of their genetics, or they will not metabolize the nutrients from their food correctly and may become malnourished.

Humidity in the enclosure should be between 35% and 45%, with the exception of the Leatherback and Silkie morphs. These morphs may need additional misting while in shed to help their delicate skin with the shedding process. Beyond the occasional extra misting their care remains the same.

Behavior and husbandry differ very little between fancy beardies and normal ones.

For many people a standard bearded dragon is a low-cost and exotic pet lizard. They love their spiky scales and light tan color.

Other keepers are attracted to the bright colors and unique patterns of a fancy individual.

In their eyes, there is just something extra special about owning a bright red dragon, or one with a heavily spotted pattern and no scales. Their flashy colors, exotic patterns and variable scale types make them “fancier”. Morph bearded dragons also tend to be a favorite with breeders too.

A fancy bearded dragon is different from a normal bearded dragon because they have unique genetic traits. These traits change either their color, pattern, size, or scale texture.

Fancy species come in a wide array of different colors. Some of the most popular range from yellow to red and even lavender and blue. Some morphs have pattern traits that can leave them spotted or racer-striped.

The care, diet and lifespan of a fancy morph is no different, except for the German Giant. You can expect your fancy bearded dragon to grow to between 16 and 24” long, weigh 380 to 500 grams, and live for between 8 and 12 years.

Beginners often adopt the normal wild-type, while breeders and advanced keepers are more likely to be drawn to the appearance of morphs.

Regardless of their appearance, all bearded dragons make exceptional pets for any keepers.