The Axolotl is known as the Mexican Walking Fish, but did you know that it is not a fish?!

Axolotls are actually a type of aquatic salamander.

What makes these animals so interesting is that they can glow in the dark and regenerate body parts. They can regrow their heart, brain, spinal tissue and even bones.

Not only are they intriguing for scientists, they are also extremely popular pets.

If you are looking to learn more about this unique species, look no further than our facts about Axolotls! This article has over 30 mind-blowing facts about these unique amphibians.

They have amazing regenerative properties and have been known to regrow limbs, heart tissue, eye tissue and even brain tissue! These amphibians have impressive regenerative capabilities and can regrow entire limbs or organs in a little under two months.

Their name is pronounced ACK-suh-LAH-tuhl and has Aztec origins. The legend states that the Aztec god of fire and lightning, Xolotl, once transformed into a large salamander. That salamander was then given the name Axolotl by the Aztec people.

3. They are only found in the mountain lakes near Mexico City

The only places that Axolotls are found in the wild are Lake Chalco and Lake Xochimilco. These freshwater lakes are just south of Mexico City, though now only Lake Xochimilco remains.

4. There are estimated to be less than 1,000 Axolotls left in the wild

Their wild populations have been decreasing quickly due to habitat loss and degradation. One of the major reasons for their wild decline was the draining of Lake Chalco. This lake was completely drained to make room for urban expansion. Axolotl are now considered critically endangered by the International Union for Conservation of Nature. 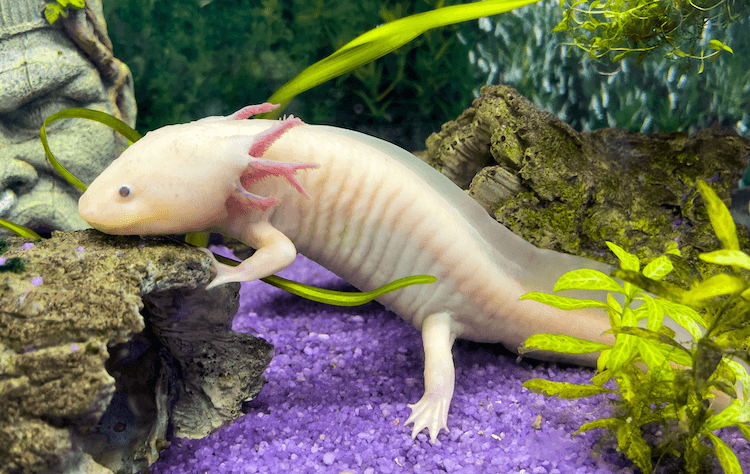 5. The Axolotl is known as the Mexican Walking Fish

These salamanders are known as the Mexican Walking Fish because they spend most of their time walking or swimming at the bottom of lakes.

Though called a fish, the Axolotl is actually an amphibian. In fact, they are considered a type of salamander and spend their entire lives in the water.

7. These salamanders are able to breathe out of water

Axolotl are considered fully aquatic and should be kept in water for their entire lives, but they can survive outside of the water due to their internal lungs.

Not only are Axolotls able to regenerate tissue, they also don’t scar.

9. Axolotls don’t have any eyelids

Since these amphibians are aquatic, they have little need for eyelids to keep their eyes moist.

10. Axolotls are illegal to own in certain states

To eliminate the trafficking of threatened wildlife, Axolotls are illegal to own in New Jersey, California, Virginia and Maine.

Scientists were able to surgically graft the head of one Axolotl onto the back of another. Usually the immune system makes complex tissue transplants like this hard, but the regenerative capability of Axolotls made it possible.

12. This species is nocturnal

Mainly inactive during the day, Axolotls spend their time asleep and hiding. When the sun sets, they begin their hunt for prey on the bottom of the lake. They are voracious carnivores that will attempt to eat anything smaller than they are, including mollusks, fishes, arthropods and even other Axolotls.

Though they need a keeper with a good understanding of aquariums and water cycling, they are great pets for people wanting a unique salamander. 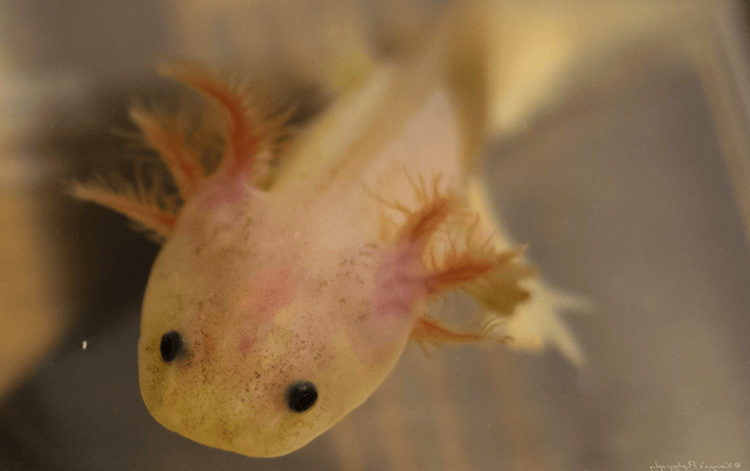 Axolotls can live long, healthy lives if they have proper care and tank setups.

In general, Amphibians have limited intelligence; their small brains mean that they have fairly simple cognitive abilities. However, one study suggests that salamanders are smarter than most amphibians and may even be capable of counting!

16. They can recognize the people that feed them

Though axolotls have poor eyesight, their love for food is legendary. They will often associate their keepers with food and swim up to the glass at mealtimes.

17. Mexico City has made the Axolotl their official animal mascot

Mexico City believed that the Axolotl was so important to their history and culture that they made it their official animal mascot.

Males will step in circles, described as a type of waltz, and then wave their tails in hopes that females will notice them.

One of the reasons why Axolotls are so popular as a research animal is because they can breed quickly and produce lots of offspring. Females often lay between 100-300 eggs on rocks, plants or other underwater surfaces.

When the Aztecs first settled in the Valley of Mexico in the 13th century, they found large Axolotls living in the lakes near their capital city Tenochtitlan. 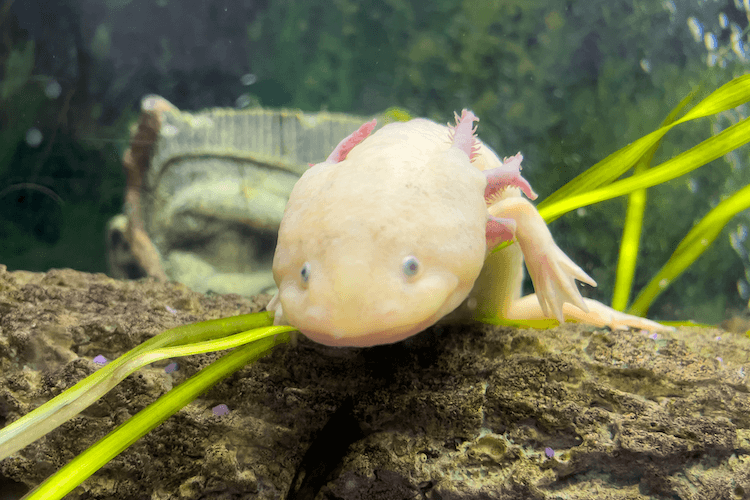 21. Axolotls were brought to Paris from Mexico in 1864

After their discovery by Europeans, six individuals were taken to Paris for research. Scientists have been using them for decades to try to unlock their regeneration secrets. Understanding their genetic information will allow scientists to understand how they regenerate tissue.

22. They are known for their adorable “smile”

Axolotls are one of the most adorable amphibians and have a cylindrical body, short limbs, large dorsal fin and colorful, featherlike gills, as well as their distinctively “smiling” faces. Their unique looks and endearing personality have made many people fall in love with them.

You can easily buy a captive-bred Axolotl for $50. Finding a reputable breeder will make sure that your salamander is in good health. They come in a wide variety of different colors and patterns, though common Axolotls are generally a mixture of brown, dark green and gold.

24. Certain morphs can glow in the dark

Some types of axolotl glow in the dark. These morphs were created in a laboratory and used almost entirely for scientific research. However, they have made their way into the pet trade so you can own a glow in the dark Axolotl.

Neotenic animals are those that maintain juvenile characteristics throughout their adult lives. Most salamanders metamorphosize out of their juvenile state, but Axolotls remain in this phase for life. Their dorsal fin, webbed feet and external gills are some of their trademark features.

26. Their life cycle is divided into 5 different phases

Axolotls are considered adults at around 1 year of age. However, they first go through four other life stages: embryonic, pre-hatch embryo, young larva without limbs, and young larva with limbs. In some phases, you can see their organs through translucent skin.

While normally Axolotls are between 6 and 12 inches long, some individuals have reached 18 inches.

28. The Pokémon Wooper looks just like the Mexican Walking Fish

The popular Pokémon franchise was heavily inspired by the unique looks of the Axolotl for their Pokémon Wooper. 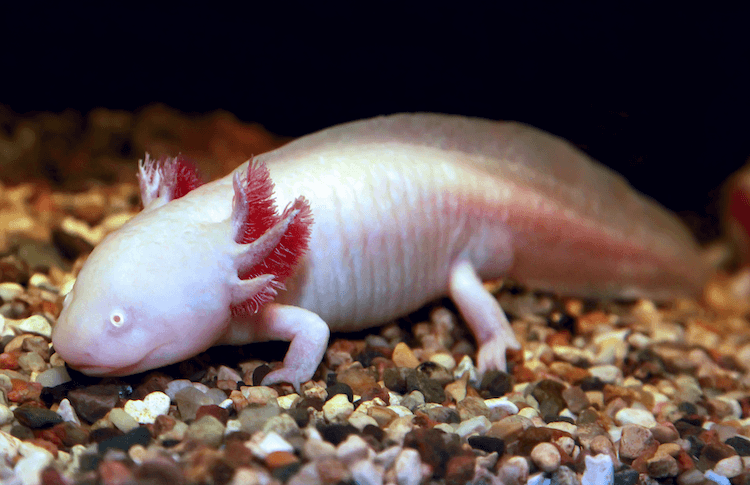 This technique is used by a variety of other amphibians and fish and involves quickly opening the mouth to create a vacuum to suck prey in.

30. Axolotls have a protective mucus layer over their entire body

These amphibians are highly sensitive and their mucus layer should not be disrupted.

31. Axolotls have 3 pairs of external gills

Their gill stalks have feathery filaments that allow them to breathe underwater. Axolotls can regrow their gills as males are known to be aggressive and will often bite off the gills of rival males.

32. Axolotls have the largest genome of any known animal

Scientists still don’t understand why their genome is 10 times larger than the human genome.

33. They can survive in very low water temperatures

Did you enjoy our weird and mind-blowing facts about Axolotls?

Let us know what Axolotl fact surprised you the most in a comment below. 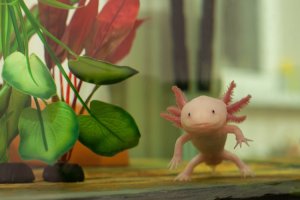 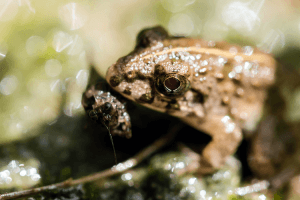 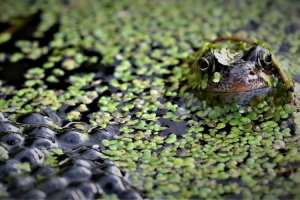 How To Raise Tadpoles In 7 Easy Steps